I've always known what I want to do when I "grow up."Well, aside from the obvious "author", that's not entirely true. I've had trouble choosing a career path (aka Author's Alternate/college major). S…

I've always known what I want to do when I "grow up."

Well, aside from the obvious "author", that's not entirely true. I've had
trouble choosing a career path (aka Author's Alternate/college major).
So I guess a better phrase would be I've always known what i want to be
when I "grow up" (the quotations mean that I'm using Grow Up to mean go
to college, and get a job). I want to be doing something I enjoy, and
that makes… Continue

Back to Israel: Recall what's foreign

When you live in a foreign place, it can become home. You forget how foreign it is.
Then you go to another foreign country, only to discover that it doesn’t seem so foreign. And you realize that the place you live actually IS extremely foreign.
That’s what happened to me during the last week, when I toured Germany to read from my third Palestinian rime novel THE SAMARITAN’S…
Continue

Just Found some amazingly low prices for UK Readers, for A Study in Red and Legacy of The Ripper

While doing a search for retailers selling my books I just came across a site that is offering some amazingly low promotional prices in the UK on both 'A Study in Red - The Secret Journal of Jack the Ripper' and its sequel, 'Legacy of the Ripper'. Price Minister are offering 'A Study in Red' for just £5.63 and 'Legacy of the Ripper' for only £7.28. There are no postage or shipping charges as well, which is great for readers.The offer… Continue

Saturday, I'll be at the Borders Express in Columbia Mall. It's been a while since I visited that little store at
10300 Little Patuxent Parkway,… Continue

Ffolkes' Medicine gets its first review.

Go check it out here:…

As part of the festivities at A Twist of Noir for reaching 400(!) stories, we have two more entries in my own Divisible-by-a-Hundred series:

Self Publishing: Good or Evil?

Story Ideas: Out of the Mouth of Babes

Where do you get your ideas for your books?

I think every author is asked this question. My answer: I get them from anywhere.…

Over at Spinetingler the nominees for the Best Short Story in the Web category have been announced.

Next week the full Spinetingler Award nominees will be announced and the polls will open.

All voting is open to the public.

I like to share comments I receive about my work. Today I'd like to introduce you to James Knight. We met Saturday at the Virginia Festival of the Book but he was already a fan.

Actually, it was James' wife Robin who bought my novel Russian Roulette for him. Later he wrote me a very complimentary email about the book. I love getting that kind of note, but it was even more exciting when James and Robin walked up to me at the Virginia Festival of the…

Recently, I found an old journal of mine. I was enjoying reading about
my past self until I came across a page that had only a few words in
the center:

It took me a moment before I realized my past self was chastising my now
present self. But because I realized what I'd written, I'd earned my
past self's… Continue 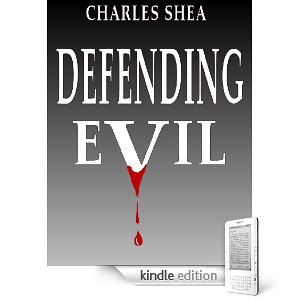 A formula for success?

MURDER IN MYKONOS Author, Jeffrey Siger, at Scene of the Crime

Some people envision moving to a Greek island as the ultimate dream retirement plan. Jeff Siger went
there to reinvent himself, leaving…

I probably have a broader and more varied family than most but I think every family has a spectrum. Meaning that among those people you love there are probably some you don’t understand real well, who are a bit… eccentric. Maybe even difficult.

I figure families are like fudge . . . mostly sweet, with a few nuts. But we need to remember that today's mighty oak is just yesterday's nut that held its ground.

visit http://snedelton.com for details and Crossroads..

The night was cloudy, dark like ink...
...and the rain drizzled on Chelsea. As Big Ben struck the eleventh
hour, Dino and the American arrived at the eighth floor apartment
of the safe house and knocked on the door. Three sharp raps
followed by another two, as agreed upon earlier.
“Who is it? Is it you Angelo?” a deep voice queried in Italian
from inside. The old… Continue

[Latest entry on my blog, www.kierynnicolas.blogspot.com]

I visited one of my local middle schools this past week. It was
awesome! I met with a group of about fifteen students who were
interested in writing, and I talked mostly about characters. I even had
a PowerPoint to go along with it. (Yes...that made me feel very pro.)

One of the points I made in my presentation is about long and cliche
descriptions. Personally, i prefer to"show" more than "tell" when it
comes to character appearance. This includes inferring a… Continue The Virginia Festival of the Book was as much fun this year as it has
been the last five. As always Saturday was a full day of watching
panels and greeting old pals, many of whom I never see except at
writing events. I had quite a pleasant group at my table for the
luncheon, and Julia Spencer-Fleming turned out to be an entertaining
keynote speaker.

Naturally the highpoint of the…