A roller coaster ride worthy of Coney Island… A crime novel and thriller set against the backdrop of Gravesend, part small town and part urban jungle in the Borough of Churches.  Brooklyn.  New York.

On an afternoon in early February, the neighborhood is stunned and horrified when the…
Continue

Angel With A Bullet receives its first 5-star review on Amazon: Nancy writes: "There is definitely a new "girl" detective on the scene, although she is neither a girl nor a detective. Dixie is well into her 30's and works as a investigative journalist. She has many of the fine habits that come with such a lifestyle, too much drinking, too many men, along with colorful and strange neighbors. In others words all the things required for a successful and interesting detective series. Like many…

Dana Rae posted this on Amazon about The Troubleshooter:

“I learned of this book on LinkedIn and the brief premise presented there intrigued me. I was not disappointed. Camacho writes a fast paced book and develops his characters so well, you feel as if you know them well. Hannibal's mission is to rescue and resurrect an apartment building, which has been taken over by druggies and drug dealers. In the process, he recruits men who have been living with little to no purpose in their…

Today I discuss the importance of a good bookstore at a literary conference on my blog, Another Writer’s Life - http://ascamacho.blogspot.com

The new issue of Kings River Life has a mystery short story by Kaye George http://kingsriverlife.com/09/15/color-me-baby-blue-an-original-mystery-short-story/

A review of J.R. Lindermuth's book "The Limping Dog", a chance to win a copy of the book and a guest post by J.R. on setting in books…

I was trying to help a friend who was writing her first novel, a Western. I looked over what she had written and it was excruciatingly boring. I said, “Westerns have some of the most colorful language of all the genres. Why aren't you using more interesting words in your writing?”

Her reply stunned me: “I don't know that many words.”

Why in the world does this person want to be a writer? Writers work with nothing but words! It's our medium, our clay, our…

Best selling and award winning author Val McDermidhas been practicing her craft for many years now. And you know what they say - practice makes perfect.

Three couples meet around the pool on their Florida holiday and become fast friends. But on their last night, their perfect holiday takes a tragic twist: the teenage daughter of another holidaymaker goes missing, and her body is later found floating in the mangroves.

When the shocked couples return home, they remain in contact,…

"Blood and Bone was my first Hannibal Jones read but not my last! This book kept me hooked from start to end. Twists and turns and a surprise ending! What could be better?? :)…

An interview with Jackson Burnett regarding his legal mystery, The Past Never Ends, appears at Open Book Society.  Check it out.  Here's the link:http://openbooksociety.com/article/jackson-burnett-author-of-the-past-never-ends-exclusive-interview/

Young Jimmy Higgins is snatched from an airport security checkpoint while his guardian watches helplessly from the glass inspection box. But this is no ordinary abduction, as Jimmy is no ordinary child. His mother was Scarlett, a reality TV star who, dying of cancer and alienated from her unreliable family, entrusted the boy to the person…

You will raise money for the safe return of Alison and Jenny McGregor. If you raise enough money within fourteen days they will be released. If not, Jenny will be killed.

Today I discuss more things NOT to do if you want your book published, in my blog Another Writer’s Life - http://ascamacho.blogspot.com

Strange things are happening at the Moniales Haut-Brion wine cellars in Bordeaux. Who would want to target this esteemed vintner? World-renowned wine specialist turned gentleman detective Benjamin Cooker and his sidekick Virgile Lanssien search the city and the…

Meet me Tomorrow in MD

Tomorrow I will speak at this month’s meeting of the Montgomery County chapter of Maryland Writers Association. I’ll talk about my books and my decision to start a publishing company. I’ll also share some of my thoughts about the book business today. The meeting starts at 7pm, in the VisArts Center, 155 Gibbs St, Rockville MD.

And When She Was Good - Laura Lippman

I'm a long time fan of author Laura Lippman and her Tess Monaghan series. But Lippman has written a number of stand alone novels that I've really enjoyed as well. Every book is an adventure as you're never quite sure what to expect from…

I met lots of new friends at the Loudoun Writers Conference.  My presentation on story structure was well received, our panel about the various publishing methods got lots of comments, and I signed a bunch of books.  I hope Tracee Garner will do this again next year.

Kept in the Dark - Penny Hancock

Forty something Sonia lives in a beautiful home on the Thames River in England. She is being pressured by…

My crime novels and thrillers are set in the Portsmouth and Isle of Wight area and I took a special trip across the Solent on the Wightlink ferry, St Clare, last week to sign copies of my latest DI Andy Horton novel Death Lies Beneath.… 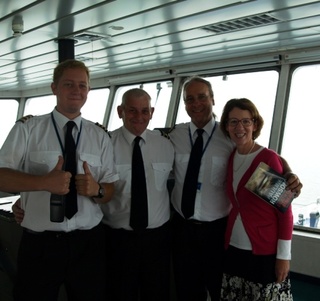 Andy Walker, son, lover and an ex-soldier, knows tragedy is only ever a heartbeat away.

When an inmate escapes from the prison farm upriver and abducts Nathan, a child Andy has vowed to protect after losing his own son years before, Andy Walker discovers that the escapee is a dark figure from his past,…