A little over a week ago Small Crimes was mostly flying under the radar, and now all of a sudden a lot of good stuff has been happening . First it makes IMBA's bestseller's list for October, then last Sunday the Washington Post publishes a rave review for it, and now this. All very surreal. There's so much luck involved in our business, so many great books and authors that never get the attention they deserve, so much… Continue

Pulp Pusher updates with an interview with Dundee's own Russel D. McLean by Damien Seaman. Come pay us a visit at Pusher Towers and hear what's what with THE GOOD SON. Also, new fiction from Mr McLean and Derek Nikitas ... try a sample from The Pusher ...… Continue

I am very excited to be able to say that I have a release date for Avenging Angel! The book is coming out on December 18th, at Red Rose Publishing.

You can get it on the publisher's site at http://www.redrosepublishing.com

Dealing with People You Can't Stand

I've read tons of advice on the subject, which boils down to understanding their motivation and therefore not being offended by the modus operandi of the jackass. I can understand all day, but that doesn't make facing such a person any easier.

Admit it. There is stupidity, arrogance, and envy in the world, and some people operate from one or more of those almost exclusively. We all have to deal with those people to some degree. They may be coworkers, customers, even relatives. They… Continue

Meet Me this weekend in VA or MD

I told you that today I'm signing books in the Borders Express in Springfield Mall, Springfield, VA, from 3 pm to 7 pm.

Tomorrow I'll sign my novels in the Books-A-Million in Greenbelt, MD. The last time I was there we only had Blood and Bone on display but this time I'll have all my books with me so if we met there before, come out and complete your collection. That store is at 6118 Greenbelt Rd. The signing is from 4 pm to 8 pm.

If you can't find me either place, you'll… Continue

My publisher, Kensington, has leased foreign rights to Master Detective to the Goodness Publishing Company in Taiwan, who will publish a Chinese language edition next year. That's fine with me as long as they don't expect me to proof the galleys.

The New England Crimebake Conference was held, appropriately enough, in Dedham, Massachusetts. The guest of honor was Halan Coben, who made an interesting observation. He said that he never met a really sucessful author who was a jerk. (Well actually, he used a synonym for jerk, but you get the idea.) If this is true, it is apparently the only occupation where this occurs.
Anyway, his novel Tell No One has been made into a movie by a French film company. Hollywood had an interest, but he… Continue

Good to know before you begin your holiday shopping

Stores that are planning to close after Christmas are still selling the cards through the holidays even though the cards will be worthless January 1. There is no law preventing them from doing this. On the contrary, it is referred to as 'Bankruptcy Planning).

Below is a partial list of stores that you need to be cautious about.

Meet Me tomorrow in VA

This weekend I'll pay a return visits to some of my favorite friends in two states. Friday, I'll be in the Borders Express in Springfield Mall. This is the first store that accepted me as an author and home of some of my biggest boosters. Come say hi between 3 pm and 7 pm so I can sign the books you're missing or need for holiday gifts. The mall is in Springfield, VA of course.

Too Deep to be Popular? Or Vice Versa?

(Cross posted on One Bite at a Time.) Crimespace currently has a couple of enthusiastic debates (here and here) about the endless dispute between literary fiction and genre fiction. Sides tend to form pretty quickly in such engagements. The “literary” side goes on about the “limitations” of genre… Continue

Curl up with a Marine Mystery this Christmas What's good enough for Dan Brown and Random House is good enough for me. Random House US is launching a major advertising campaign in the USA on 23 November, with Dan Brown and other notables from the world of fiction, showing consumers that books make an ideal Christmas present. So, in my own little way I thought I'd beat the drum for the UK.
According to a survey in the UK by Deloitte, (one of my former employers by the way) books are desired… Continue 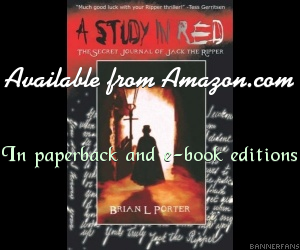 I'm delighted and amazed to have discovered that today, 'A Study in Red - The Secret Journal of Jack the Ripper' achieved its highest ever sales ranking at Amazon.ca. It was listed at number 1,475 in their rankings. It's never even been that high in the UK or USA where it has done very well indeed and I'm so pleased that it has recorded such a great ranking in the country… Continue

I don't think there is an end to most of my written work. Obviously when something goes to publication, I have to say it's finished, but until that point, I never feel like I'm done with it. However, I made a big step toward the end of my WIP this morning: a rough draft that, in spite of its holes, feels like a complete story.

There is lots still to do. Characters morphed during the course of the story and now have to be adjusted in their entrances. Details have to be added that… Continue

My holiday story, "Biscuit Connection," has just been posted on Sniplits.com and is available for download at a very cheap price of 88 cents. Here's the blurb: Samuel's been dragged from one of his wife's volunteer activities to another. Now it's Christmas, he's stuck dishing up mashed potatoes at the food kitchen, and he's hungrier then he realized. Winner of the Mom Writers' Literary Magazine Short Fiction Contest in 2006. Family friendly....

I've listened to the story myself and… Continue

Not too long ago I was watching a primetime television show, as I am wont to do. And lo and behold, there was a commercial for the next Stephen King novel. It contained all of the bells and whistles of a movie trailer, and made those book trailers put together by authors on their own dime (mine, for instance) look woefully inadequate in comparison.

Which got me thinking: what an enormous wasted opportunity...read the rest… Continue

The Self Fulfilling Idiocy of Hollywood Keeps on Fulfilling, Idiotically...

I usually blog about writing and books here, but my main blog is about the business of pop culture, and since this post is also about the rights of writers, I figured I should post it here to.

I just can't understand the people who run Hollywood these days. I mean I can contemplate their motivations, and even theorize about them, but I just can't picture myself doing the same things.

That's because I… Continue

Roland Longville number three, Dead Birmingham, hits the bookstores next month. I am currently working on a screenplay at the behest of my publisher, a fine gentleman is eager to help me promote my fledgling series. I am gathering steam for a book tour, to begin soon. More to come...

Cross posted to Working Stiffs
(With special thanks to Detective Jill Rustin of the Pittsburgh Bureau of Police Firearms Tracking Unit for her assistance with this post.)

The new class of Pittsburgh’s Citizens’ Police Academy is in session and I dropped in to pick up a segment that wasn’t offered last time. Detective Jill Rustin spoke about the Firearms Tracking Unit.

In Pittsburgh at the time of her presentation,… Continue

I met Jerry at a signing at Borders in Silver Spring, MD. After a short conversation he took home both of the Stark and O'Brien adventures. This week he was kind enough to e-mail me to let me know that he read both books and enjoyed them. I appreciated his comments so much that I used them for the featured review on my web… Continue

I mentioned last week that I'd read a friend's manuscript and enjoyed it a lot. One reason is that it was different from my usual reading. In other words, not a mystery.

I love mysteries. I read them, write them, even think them. Items on the evening news revolve in my head and I start figuring out how that could be a plot for the next project. It usually doesn't happen, because I have way more plots than I have time to write them. (Probably a good thing.) I may have reached a kind… Continue