Let’s get straight down to business. This week, I’m pleased to reveal the cover art for the second in the Zac Hunter series, Blood Law: 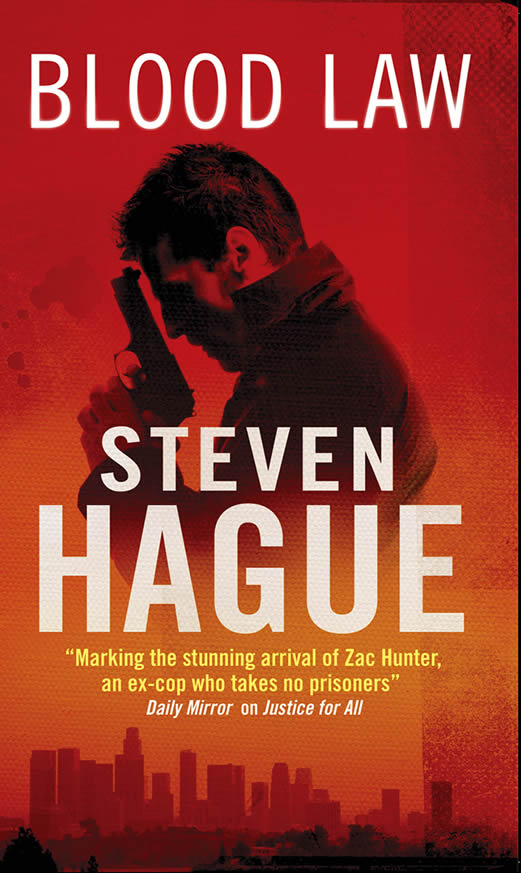 I’m really pleased with it, and I think that my publisher, MIRA, have done a great job. The shot of the L.A. skyline across the base of the image echoes that employed on Justice For All’s cover, providing continuity and highlighting the urban theme of my books, while the image of Hunter in… Continue


There’s been no blog for the last couple of weeks as I’ve been on vacation in Borneo. While I won’t bore you with all the details (or make you sit through the hundreds of photos I took), suffice to say that it’s a beautiful country filled with marvellous people, and I’d like to give a shout out to all my new friends at the Kinabalu Club!

The first thing I did on my return was to check my e-mails as I’d been eagerly anticipating one from my publisher,… Continue

It’s official – the second novel in the Zac Hunter series, Blood Law, will be released in the UK, Eire and South Africa on the 17th July 2009. To give you a brief teaser as to what the book’s about, here’s the blurb that will appear on the back cover:

All hell is breaking loose in the city of Angels...In this breakneck sequel to "Justice for All", ex-LAPD detective Zac Hunter receives a cry for help from an old snitch, gangbanger Angel Cortez. Angel's daughter Gracie has gone… Continue

It’s reached that time of year when the summer writing festivals start assembling their line ups, and I can now reveal that I shall be attending CrimeFest in Bristol, which runs from the 14th – 17th May. CrimeFest is a convention for people who like to read an occasional crime novel as well as for die-hard fanatics, and it features a series of panels, interviews, reading groups, crime writing workshops, dinners and award presentations. I have been invited to appear on two of the… Continue

Some good news - Justice for All has been selected for inclusion in the annual book groups run by the Harrogate Crime Writing Festival. The internationally acclaimed Festival, sponsored by Theakstons Old Peculiar, is now in its seventh year, and I’m really pleased that JFA was chosen as competition was fierce. The novels will be sent out to reading groups in the north of England, the titles will appear on the festival website where they’ll generate discussion, and they’ll also be discussed at a… Continue

After a one-week break from blogging duties to concentrate on birthday celebrations, I’m back with a vengeance with a bumper issue!

First up, another great review for Justice For All, this time from the highly influential CrimeSquad website. I’m really excited about this one, as CrimeSquad are major players in shaping on-line opinion with regards to crime fiction. Their site receives a huge number of hits per month, and visits continue to grow at an exponential rate. The review… Continue

No blog this week as I'm in the middle of my birthday celebrations!

I spent last week reading through the manuscript for the third novel in the Zac Hunter series, The Beholder, ahead of delivering a draft to my agent, Broo Doherty. The task was more onerous than I expected, resulting in a few late nights and early mornings, and I ended up cutting another 4,500 words from the prose. This brought the total down to around 93,000, which is more in line with that of both Justice For All (89,000) and Blood Law (91,000), and I’m confident that the cuts have helped… Continue

Last week I received a proof of my second novel, Blood Law, from my publishers, along with a request for me to give it one last read through ahead of it being type-set for printing. At this stage I’m really only looking for any mistakes or minor corrections, and I now have a two week window of opportunity in which to notify my editor of any such amendments, so best I get reading!

Strangely enough, my third novel, The Beholder, also requires a read through, as I’ve now completed the… Continue

Not much to report from last week, as I spent my time scanning through The Beholder, making some minor enhancements as suggested by my wife Lisa, and looking for opportunities to include some additional research to help add further depth/realism to the novel. This research can provide background colour, such as being able to name types of cactus and vegetation in a desert, or it can be more facts and figures based, such as being able to quote the length of the US-Mexico border along with the… Continue

Last week, I spoke to Suzannah Sorrell, the editor of up and coming mens’ quarterly ‘1 Degree East’, regarding my debut novel Justice For All. Suzannah really enjoyed the book, and she plans to include a couple of features on me in the magazine’s next two issues: first, an excerpt from JFA in their Q1 issue (due out at the end of January), and then an interview with yours truly in their Q2 issue. More news to follow in the coming weeks.

And now for some good news on The Beholder. My… Continue

First up, Happy New Year to one and all, and I hope that 2009 brings you all you could wish for.

2009 has certainly started off well for me, as my debut novel, Justice For All, has won its first award. For those of you that have been reading this blog for a while, you may remember that JFA attracted a glowing review on www.sonsofspade.tk back in early November. The Sons of Spade website is run by a Dutch writer, Jochem Steen, and it’s a great source of information about the crime… Continue

In the course of the last week I finished my first read through of The Beholder. This initial edit was all about cutting out any extraneous verbiage, and it resulted in the total word count falling from 106,000 to 96,000. For the most part, the stuff that got the chop was either odd words or sentences that simply weren’t needed, as they over described either the setting or the action.

I then moved on to stage two, which was to work through the assorted notes and comments I made… Continue

Death Of A Thousand Cuts
Last week saw the start of the editing process for The Beholder. Having completed the first draft of a novel, the first thing I do is to give it a read through to tidy up the prose, which generally involves making lots of small cuts. My first drafts tend to be a little on the flabby side, as it’s fair to say that I have a natural tendency towards verbosity, but I also think that there’s a sub-conscious factor at work, namely that when I set out to write a… Continue

On the publicity front, an abridged version of the interview that I had with the Bookfiends Kingdom (www.bfkbooks.com) is now up on the publicity section of my website. Please visit www.stevenhague.com here to read it.

But on to more important matters – namely the promise I made to have finished the first draft of The Beholder by the time I write this blog. Good news folks – I’m a man of my word! It finally came in at a meaty 105,000 words, which is the longest first draft of the… Continue

Not much to report from last week, so I’ll keep this short and sweet. Total word count for The Beholder is now up to 103,500 words and I’m very close to finishing the first draft. The climactic finale has been written and I’ve got just a scene and a half to go in which I’ll tie up a few loose ends. I was hoping to have completed these scenes on Friday but another bout of illness struck me down and kept me away from the P.C. (that’s twice in the last few weeks – sickly child or what?). If you… Continue

As some of you may have noticed, the layout of the site has undergone some minor changes (although I don’t think my web designer, Christine, would thank me for calling them minor!). From now on, when you click through to the publicity page for JFA you’ll find a list of all the interviews and photos opps I’ve carried out thus far (whereas previously they were all on this page, meaning that you had to scroll down them to find specific items). All you have to do now is simply select an item and… Continue