Hey:  I'm at these two blogs this week:

As he did in BLEEDER, John Desjarlais takes a contemporary mystery and expertly intertwines a supernatural one.  VIPER features Selena De La Cruz—insurance saleswoman, shoe fashionista and former Drug Enforcement agent—who is forced back into police work when a hit list is discovered and her name is on it. The nine people on the list have one thing in common—they all… In the book of Genesis, it is written “I will make you enemies of each other: You, serpent, and the woman. She will crush your head and you will strike at her heels.” (Genesis 3:15) That quote serves as the inspiration for John Desjarlais’ latest work of Catholic fiction, “Viper,”… Continue

Here it is - wish my name was bigger. Still time to change that. I think. 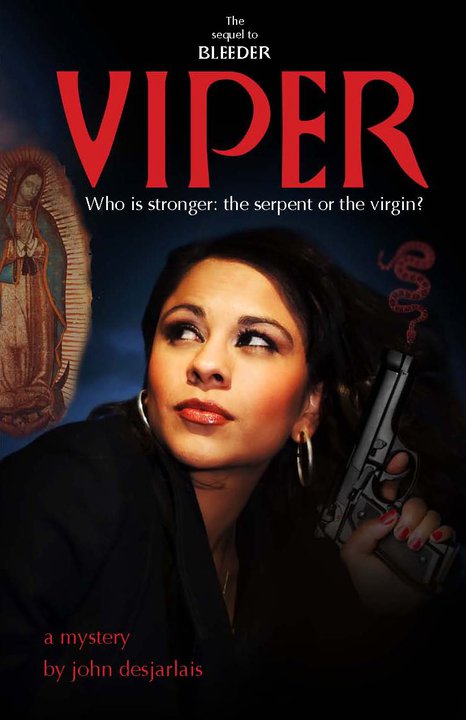 Dear friends: the sequel to BLEEDER, VIPER (Sophia Institute Press) is scheduled fror a fall release. I'm looking for bloggers and published writers who might be interested in writing a blurb or review when ARCs become available. You can see a cover prototype and story summary on the VIPER page at my web site, http://www.johndesjarlais.com -- please let me know off-line if you're interested and I'll put you on the list for possibly receiving an…

I have a blog entry on handling story beginnings at http://sirjohn.org/blog7/2010/07/23/writing-tips-by-guest-blogger-john-desjarlais/

I'm guest blogging this week at http://mikemanno.blogspot.com, about Bleeder and Viper

Having trouble posting it here. You can see it at my blog, http://jjdesjarlais.blogspot.com

I love stories of castles and knights, but there is so little good stuff written about this part of our history. Desjarlais is a master of historical fiction--weaving vivid descriptions of the food, clothes, beliefs, politics and habits of the time into a story that grabs hold of your imagination and doesn't let go! For the guys, there's plenty of swordplay, action and intrigue. For the girls, there's romance and uncertainty. I never knew what a key role the collection and preservation of… Continue

http://d-review.blogspot.com/2010/04/bleeder.html
(oh, and the previous review was at thegenreview, not just 'genreview' - I omitted the "the" - sorry.