2 Days only –Wednesday and Thursday, $.99 only, the novella “Call Me Smitty-First Kill-Volume 9” by B.R. Stateham

B.R. Stateham has a very nice series he has been working on called “Call Me Smitty”; it is about a hitman/assassin that at times has a very big heart and at others is as cold as dry ice.

Starting today, Jan. 25th and ending tomorrow the 26th we are putting the newest installment in the series on sale for $.99. Normally we price a novella sized story at $2.99, but to get more readers interested in the series we are reducing the price for 48 hours. 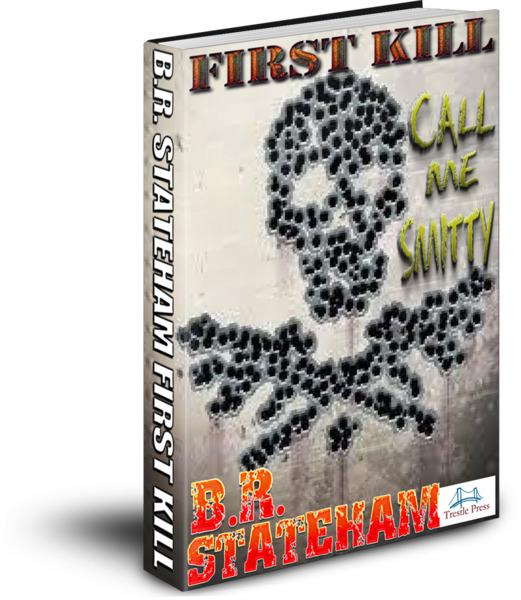 Here is the synopsis, the link to Amazon Kindle where you can get it, and B.R. Stateham’s author biography. He is a guest on The G-ZONE blogtalk radio show today at 4.30 pm EST, that link is here also:

Three more deadly stories featuring the dark-eyed hit man, Smitty.  Story number one gives details on Smitty's very first hit, and the repercussions coming from allowing too much emotion to cloud his judgement.  The second story has Smitty lying on the deck of a fishing boat.  But this is no vacation, pilgrim.  The third story has a father seeking his son.  But who is the father?  And where is the son?

Three bloody tales following the bloody trails of a man who is very good at his job.  Are you brave enough to read them?  Leave a light on tonight when you go to bed.  Smitty may be lurking in the shadows.

B.R. Stateham is a fourteen year old boy trapped in a sixty-one year old body.  His enthusiasm and boyish delight in anything mysterious and/or unknown continues.

Writing novels, especially detectives, is just the avenue of escape which keeps the author’s mind sharp and inquisitive.  He’s published a ton of short stories in online magazines like Crooked, Darkest Before the Dawn, Abandoned Towers, Pulp Metal Magazine, Suspense Magazine, A Twist of Noir, Angie’s Diary, Power Burn Flash, and Eastern Standard Crime.  He writes both detective/mysteries, as well as science-fiction and fantasy.

Also in 2008 he self-published a fantasy novel entitled, Roland of the High Crags: Evil Arises. The novel, the first in a complex fantasy series, is about to be re-issued through a new ebook publishing house, Trestle Press.

In 2009 he created a character named Smitty.  In 2010 a collection of Smitty stories, and a two-novella set came out featuring this dark eyed killer, again by Trestle Press.

Married to a long suffering wife for a quarter century, B.R. Stateham is the proud father of three and doting grandfather of five.