Dan Coleman and I share a storied history in a certain way. We're both CrimeSpace members, refugees from the Shadow Line Press debacle and now authors on the Trestle Press roster. Following the whole Shadow Line Press mess, Dan had some doubts about whether to keep at the crime fiction thing. I don't blame him. So did I. 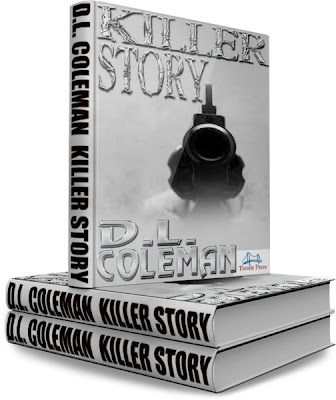 Then Trestle Press came to town. Fellow crime author B.R. Stateham signed up with this forward-thinking indie press. I jumped on board soon after seeing what innovative things Giovanni Gelati and crew were doing, specifically after listening to a G-Zone podcast show. I signed up, then pulled as many other ex-Shadow Line Press authors with me. This included David Hoof and, most recently, Dan Coleman.

Thank goodness Dan is back on the crime fiction scene. I missed his blunt style on the CrimeSpace boards. He's got the resume to back up what he's writing, something I always admire.

Here's his bio from Amazon, under the name D.L. Coleman.

D.L. Coleman is a native of Tidewater, Virginia, and has lived half his life in the Carolinas, North and South. He served in the U.S. Marine Corps in the early-mid-'60s and attended Christopher Newport College of the College of William & Mary, then later graduated from CNC in Political Science. He was the founder of the International Crime Study Club in the early 1980s and has a long-standing interest in cold cases of murder and missing persons. His writing includes literary and mystery novels. This is his first published mystery novel. Currently, he is temporarily retired and lives with his family in North Carolina.

Nothing beats a crime author who's actually pursued real-worled mysteries. He has the chops, and let's the world know it in his new novel, Killer Story.

What's cool about Killer Story is it's being released in 99-cent installments. It's like following a mini-series on TV. Just another way e-books are changing the landscape of publishing.

Here's what Killer Story is all about:

P.I. Wray Larrick, at the request of his former girlfriend, a beautiful t.v. reporter, goes to North Carolina to help the Carolina Storms ownership of the women's professional basketball team investigate the inexplicable murder of their superstar franchise player and immediately finds himself in a sinister world of rich, powerful women, either of whom, among others, could be the killer with reason to gain or lose from the victim's death. But on arrival, Wray quickly focuses his suspicions on the renown super coach, who at every turn proves herself a chronic liar with a faked alibi. In a case that takes him from the beaches of the Crystal Coast, to the bayous of Louisiana, to Philadelphia, and back down south, Wray follows his instincts and the trail directly to his suspect's door, only to discover, almost too late, that things are not always the way they first seem.


Dan was nice enough to send me a sneak peak of this series, and I can guarantee it'll have you hungry for the next installment. You're going to find P.I. Wray Larrick's case intriguing even if you've never watched a WNBA game.

Click here to check out the first installment of Killer Story yourself from Amazon. It's also available at all major e-book retailers. Cheers, Dan!