I came across a fascinating article on the Writers Forensic Blog, which not only provides some basic research for someone writing a crime or thriller novel but can also throw up ideas for plots and perhaps warn those using social networks to be a little bit more careful about what they post.

Below is just a flavour of  what can happen from author and law professor, Lori Andrews in her latest non-fiction book, I Know Who You Are and I Saw What You Did: Social Networks and the Death of Privacy.

"Facebook posts can provide the motivation for a murder—such as the 34-year-old British man who hacked his estranged wife to death after she changed her Facebook status to “single.”

"Posts can also provide ways to uncover crimes. The IRS searches social network sites for evidence of taxable transactions and the whereabouts of tax evaders."

I expect here in the United Kingdom Her Majesty's Revenue and Customs are busy doing the same.

Cyber crime has always fascinated me.  I chose it as the basis for one of my thrillers: In For The Kill. 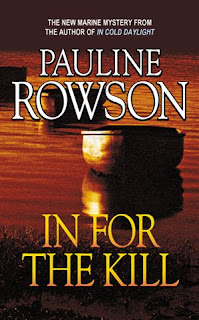 In For The Kill, is a thriller about a man whose computer is hacked and embedded with false information leading to his arrest and imprisonment.

Alex Albury, the victim and the hero in In For The Kill is released from prison after serving three and a half years for fraud and embezzlement, determined to find the man who framed him. All he knows is his name: James Andover. But who is he? Where is he? Because of his experience though Alex has a phobia about using technology to assist him and that includes using a mobile phone. Alex embarks on his quest to track down Andover, but with the trail cold he is frustrated at every turn. Worse, he finds himself under suspicion by the police. The pressure is on and Alex has to unearth the answers and quick. But time is running out. For Alex the future looks bleak and soon he is left with the option - to kill or be killed

And here is some more from Lori Andrews:

"When a woman advertised a diamond ring for sale on Craigslist, the people responding to the ad robbed and beat her and shot her husband. She’d posted her address in the ad, but sometimes people unwittingly reveal their location and information about their possessions. Photos taken with most smartphones, for example, have embedded in them a string of digital data known as a geotag. When a woman posts a photo of her new engagement ring or her new baby, the geotag reveals the physical location where the photo was taken. Free software programs can readily decode the information and provide a Google map of the location, leading security analysts to warn about a new problem, “cybercasing,” where anything from a theft to the kidnapping of a child can be planned based on data people unwittingly reveal."

Scary, isn't it? Lori Andrews continues: "Checking in on Facebook or Foursquare can also create risks. In New Hampshire, a burglary ring hit more than fifty homes when people posted status updates on Facebook indicating that they weren’t home".

She goes on to write: "Some people are so dependent on social networks that they can’t make a decision about anything—whether to buy a certain car or break up with a boyfriend—without doing Internet searches or running a poll of their friends. When faced with the evidence in a British sexual assault and abduction case, a juror posted the facts on her Facebook page and said, “I don’t know which way to go, so I’m holding a poll.”

So ideas and inspiration  for contemporary crime and thriller writers there.

Nominate your favourite crime author for the Crime Writers' Association (CWA) Dagger in the Library Award 2012.

This gives readers and librarians the chance to nominate their favourite crime author.  I was delighted to reach the long list  in 2008 and would be chuffed if I made it again to either the long list or the short list.

Nominations are open until 31st March 2012 so there's time to get your vote in.

Sponsored by the publishers, Random House, the Dagger is awarded not for an individual book but for the author’s body of work. The nominated authors must be alive, preferably working in Britain. Nomination forms may be downloaded from the CWA website  and handed in at a library, or you can obtain the form at your local library.