Looking for a Christmas Mystery? 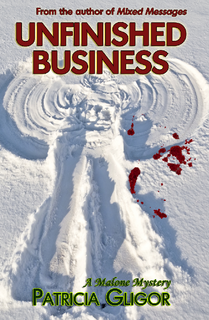 I'm thrilled to announce that, in just five days, on Tuesday, November 20th, Unfinished Business, the second novel in my Malone mystery series, will be released, available at amazon.com and postmortem-press.com. Here's the blurb from the back of the book.

The Westwood Strangler is dead. Or so everyone believes.

The National Weather Service issues a severe winter storm warning for the Cincinnati area, predicting blizzard conditions, and Ann worries that her sister and her new boyfriend won’t be able to make the drive from South Carolina.

Then, a woman is found strangled in Ann’s neighborhood and everyone, including the police, assumes it’s the work of a copycat killer. However, when two more women are murdered in their homes, the police announce their conviction that the Westwood Strangler is responsible.

When Ann hears the news, the sense of safety and security she’s worked so hard to recapture since her attack on Halloween night, shatters. If the intruder who died in her apartment wasn’t the Westwood Strangler, who is? And, who will be the next victim?