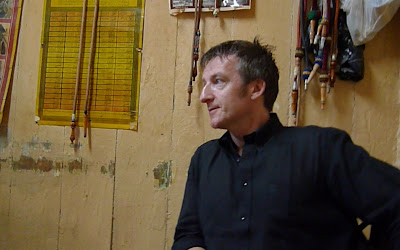 My favorite little coffee shop in Jerusalem’s Old City is just inside the Muslim Quarter, behind the Church of the Holy Sepulcher where Jesus is believed to have been crucified, buried and resurrected.

Once you’ve sucked on the tobacco in this café, even hanging on a cross with nails through your hands and feet would be a relief. It's like smoking a three-foot-long unfiltered Gauloise.

But I keep going back. I like the location -- down the steep narrow alley outside the café, a short walk takes you to the Cotton Souk and straight onto the Temple Mount by the side of the Dome of the Rock. I like the environment, too. The men (only men) puffing on their nargilas are friendly and talkative. The volume on the radio is unpredictable. The electricity keeps cutting out. The plaster’s peeling from the walls, and the toilet is a stomach-churning masterpiece by a coprophiliac Jackson Pollock. Yes, it’s a great spot.

This week I stopped in to shoot a video for my next novel, THE FOURTH ASSASSIN, which will be out in February. The book’s set in Brooklyn. My Palestinian detective Omar Yussef travels there to visit his son, only to find a dead body in his son’s apartment. The action of the book takes place mostly in Bay Ridge, which is becoming “Little Palestine” due to an influx of Palestinian immigrants. There are also chapters around the U.N. in Manhattan and in Coney Island. 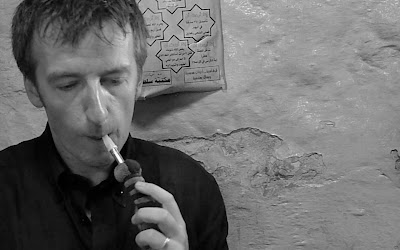 My videographer David Blumenfeld and I decided to shoot the atmospheric background shots in Brooklyn. My pieces to camera: in the café.

As David set up the lights and the two cameras, I negotiated with the fellow who serves the coffee to make the place a little quieter for our recording. I asked if he’d mind turning off the radio (“It doesn’t really work anyhow,” I told him, as the radio cut out once again. “But when it does, people like it,” he said.) and the noisy fan (“What fan?” he said, wiping his sweaty moustache. “Oh, that thing.”)

I hoped the nargila would throw off some atmospheric smoke, as it usually does, giving our shot a noirish quality. The particular brand of tobacco bubbling through the water pipe that day was the nastiest I’ve ever encountered. And no smoke. Just an invisible poison that left me hacking through my script and reaching for my glass of coffee.

(Incidentally, in the Jerusalem accent a “nargila” is an “’argila,” because they often drop the opening syllable of a world. Thus, the only place in the Arab world where they can’t pronounce “al-Quds,” the word for Jerusalem in Arabic, is Jerusalem. They call it “al-‘uds” here.)

After a couple of hours of sucking on the nasty pipe and clearing my throat with thick, cardamom-flavored coffee, I’d done the script in English, French, Italian, and German. I was too jittery to sit there any longer. David and I hauled our equipment to the beautiful Austrian Hospice, a hotel and coffee shop on the Via Dolorosa.

On the roof of the Austrian Hospice, David filmed me reading the opening chapter of THE FOURTH ASSASSIN. It was the height of the afternoon sunshine and I was unwisely wearing a black shirt (trying to look noirish again). David pulled out a big reflector disc to direct light to the unlit side of my face. It blinded me. “Isn’t that how King David defeated the Philistines?” I said.

When in Jerusalem, you know, stick to the Bible.

We’ll be editing the video for THE FOURTH ASSASSIN this month and posting it to Youtube. Meanwhile, you can see the videos for my first three books on my website.

Comment by Benjamin Sobieck on July 15, 2009 at 12:11pm
Hole-in-the-wall bars are the usually the best. No B.S. No social scene to impress. No loud, thumping music. Just people smoking and drinking. I had such a place in college. The food took years off my life, the smoke never cleared and the patrons drank quietly. But the help knew us by name, the booze was cheap and no one caused trouble. I miss that place.