THE FRAILTY OF FLESH has just been reviewed in THE GLOBE AND MAIL. 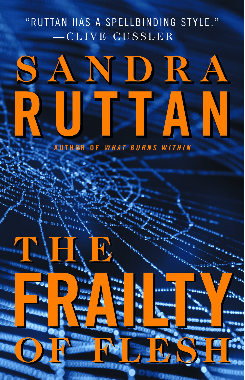 Significant, because not only does it mark my first major newspaper review, but because of the long-held beliefs that mass market paperback releases struggle to gain prominent industry reviews.

When WHAT BURNS WITHIN was released it was reviewed in Publishers Weekly and Library Journal. Both books were reviewed in Romantic Times. I've seen a review in Crimespree for WBW.

The point is, I've gotten print reviews, and prominent print reviews for both books. Are we nudging the line, getting to the point where mmpb releases are no longer discriminated against in reviewing circles? Or does it boil down to luck of the draw, quality of the books, the push from the publisher?

Who knows? I don't. All I really know is that this marks my first major newspaper review, and when you consider that the Globe and Mail has the highest circulation of all the national newspapers in Canada, it makes it the Canadian equivalent of a NY Times review, so I'm thrilled.

Sandra Ruttan's sequel to What Burns Within, her first novel set in Vancouver and featuring Constables Nolan, Hart and Tain, is better than the first. A four-year-old is beaten to death in a park. The child's brother, hiding in the nearby brush, claims that his older sister killed the boy. Furthermore, the sister is missing.

Criminous kids are bad enough, but Ruttan, a disciple of the Val McDermid school, takes things a bit further. To say more is to give away a terrific plot. - Globe and Mail

Comment by I. J. Parker on December 20, 2008 at 7:14am
Oh, very nice! I love Margaret Cannon's reviews. :) This is a great compliment to you as a writer and means you'll have all sorts of success. Cannon didn't get around to me until book 4, I think. And mine was tpb.

Comment by Linda L. Richards on November 17, 2008 at 12:20pm
See? It goes back to the luck or hard work thing again, doesn't it? Wait: that's a different conversation altogether!

Comment by Sandra Ruttan on November 17, 2008 at 11:48am
I've been out most of the day, but wanted to jump in now to say thanks to everyone who commented.

I'd like to think that starting with a great book is what makes the difference, but then, when you've just been reviewed yourself that sounds pretty egotistical to say. Nonetheless, I'm delighted, especially since MC is a cozy fan (and like you say John, this isn't a cozy!) and I take being put in Val McDermid's school as high praise.

And Linda, I like David's quote, and I can see why you pull it out regularly. He's right.

Comment by John McFetridge on November 17, 2008 at 6:00am
Congrats. You know your book is good because Margaret Cannon loves her some cozies and this sure isn't a cozy.

And maybe you're right: maybe we have turned a reviewing corner somewhere, where the format is becoming less and less important. Here's what is *not* becoming less important: whatever the format, you have to start with an excellent book. And I know I've tossed this quote from David Montgomery around a whole lot, but I'm going to do it again. It resonates with me, always. And it resonates right now. Here goes:

"The best way to get your book reviewed, and the best way to have it be a success, is to write the best book you possibly can. And that is the one area of the process over which an author actually has control."

To paraphrase, if the book is crap, the format will not matter. If you begin with an excellent book, you've done more to help the process of promotion than probably any other thing over which you have control.

And clearly, Sandra, you've started with an excellent book! (Margaret has a killer eye.) I'm looking forward to reading it.

Comment by Tom Barclay on November 17, 2008 at 5:41am
Excellent news, Sandra, and a fine review - with a comparison to Val McDermid, no less!! How terrific.

Take today's sheet out of your calendar and have it bronzed. You deserve it!

Comment by Dana King on November 17, 2008 at 5:07am
Congratulations, Sandra. Not just a review, but an enthusiastic review. I also love the cover. Spider webs are so symbolic of interconnectedness, fragility and paradoxically, strength, they're great for creating images for a crime story.

Good luck with this one, though it looks like you're over a hump or three already.