It only seems like five minutes ago I was writing the entry for June and here we are in July (and with little sign of the summer in the UK). So what's happening in July?

On 5 July I am to be guest crime author at the annual conference of the British Society of Criminology taking place at the University of Portsmouth, Institute of Criminal Justice Studies, (ICJS).

I'll be appearning on a panel on the afternoon of 5 July with my fellow crime writers, Graham Hurley, Peter Lovesey, June Hampson and Linda Regan and I'm really looking forward to it.

The conference is themed around ‘Criminology at the borders’ and coincides with the twentieth anniversary of ICJS. It brings together academics and practitioners operating at the cutting edge of thinking on crime and justice and provides an insight into some fascinating topics including cyber crime, international and organised crime; policing and law enforcement across national boundaries,global criminology, between and across national borders and her own panel event, crime cultures – fictional meets factional imageries of crime and justice.

I'll be in the studio chatting to Julian about my crime novels set in Portsmouth, the Isle of Wight and the Solent area and talking about the new DI Andy Horton, Death Lies Beneath which is published on 26 July.

If you can't catch the interview live then you can listen to the programme again via the BBC Radio Solent website.


July also sees the publication in the UK by Severn House of the  NEW DI Andy Horton marine mystery crime novel Death Lies Beneath, number eight in the series.This is once again set in the Portsmouth and Solent area of the UK. 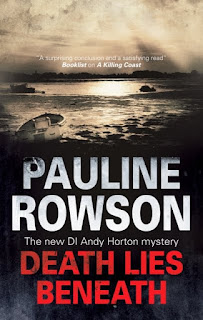 Also in July I'll be continuing to write the ninth in the DI Horton series, as yet untitled.  I'm currently working on the revisions and hope to have it completed by the end of the month or at the latest the first two weeks in August.