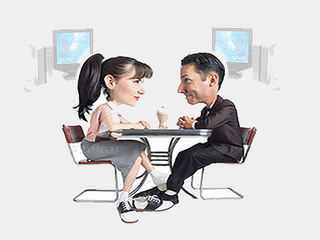 You know how it is. You lean over and whisper into its ear, invite it up to your place for a drink and some smooth music on the iPod ... and there it is: you've dated your story through the mention of technology.

Mr. Rickards thinks it's daft, and Patti thinks it's more specific than that. I've always leant away from using brand names in novels and I'm wondering if that's because I'm a programmer and want to use variables rather than constants.

Or is it a cultural thing, to use brand names? I've noticed that Americans (are there any here?) seem to prefer using terms like Xerox, 7-Up and Google, rather than photocopying or lemonade (that's what we call it down under, even if it doesn't have any lemons in it) or 'look it up on the net' or just plain 'look it up'.

My theory with novels is that using brand names takes you out of the story, unless it's a specific trait of a character or otherwise relevant.

Do you writers ever balk at using a brand name? Do you readers wince or raise your eyebrows when someone Googles something for the umpteenth time?

Tell me now, or I'll just have to Google it myself.

Permalink Reply by Stephen Blackmoore on October 6, 2007 at 12:19pm
I think it really depends on how obtrusive it is. Like using place names it can root a reader into a setting just as much as it can take him out of it. And if it contributes to a plot point that would be easier to get across than trying to make it generic then I think it's okay. Like anything else, though, it can be overused.

Permalink Reply by Cornelia Read on October 6, 2007 at 12:22pm
I use brand names if the specificity adds something to the description (mostly). Like, Cafe Bustelo is a really cheap, strong kind of ground coffee I used to buy in New York to make my espresso with. It gets mentioned a few times in my second book. I mention specific brands of beer because they mean different times, places, and tastes to me (especially if another character is drinking it, not just my protagonist).

Google and iPod I haven't had to consider, yet, since I haven't moved the series out of the late eighties yet.

Permalink Reply by Bill Cameron on October 6, 2007 at 1:58pm
I actually used Google as a verb in my last novel, but as with Stephen and Cornelia I used it because it helped with not only a sense of time and place, but also the character's place in them. Like adverbs, they can be used well if used judiciously (snort).

Permalink Reply by Daniel Hatadi on October 7, 2007 at 10:41am
Bustelo is a very evocative name, at least to a simple man like me.

Permalink Reply by Patricia Abbott on October 6, 2007 at 2:04pm
There was such a big discussion of this when I first started taking writing workshops ten years ago. KMart realism they called it, referring to the work of Bobbie Ann Mason and Raymond Carver who dropped brand names every paragraph. But a word like "google" really nails a precise and specific activity so I think you have to use it. Although twenty years from now it might be as arcane and archaic as words like shorthand and typewrite are now. Still it will create a sense of place, be it a lost one.

Google does seem big enough to have a ton of momentum, but there was a time when AltaVista was the king of search engines, and before that Yahoo. So you never know. Maybe Google will come up with some technology that is the direct cause of the fall of human society on Earth, and in the years to come for the small colony living on one of the nearby planets, all works of fiction will be removed if they reference Google.

Permalink Reply by Angie on October 7, 2007 at 2:53am
Hate to say it, but some brand names are more recognizable than the generic term. Kleenex vs. tissue (which has multiple meanings), for example. As for iPod...well it's kind of the same thing. I still kinda stumble when I hear or read mp3 player, but I know exactly what an iPod is. Too much of a good thing, though, and it's like reading a novel set in a merchandising catalogue. Not enough and the story can wind up feeling like it's floating in a weird no-time reality. So, y'know, balance and all that.

Permalink Reply by Daniel Hatadi on October 7, 2007 at 10:48am
iPod is the one example where that holds true in Australia, but seriously, people use the word 'tissue' rather than 'Kleenex' almost every time.

But you're onto something with this no-time reality. Forget about balance, let's go all minimal and remove as much as we can. I want to go to this place. How do I get there Angie? Help me!

I just woke up by the way.

Permalink Reply by Sandra Ruttan on October 7, 2007 at 1:28pm
I remember doing a unit on this back in high school, in an English course. We have many brand names in North America that have surpassed the generic. Band Aid, Kleenex... I think you could argue Aspirin in lieu of painkiller was a common replacement, for at least a time. "Take two Aspirin and call me in the morning" was a common expression, although I don't recall the origin there. There are a lot of others, but they've gone out of my head at the moment.

This may come down to a bit of a Canadian thing, but the language does ground in a sense of place. There are subtleties. We interchange our US and UK editions, so a cell phone is a mobile in another and I seldom give it a second thought. When I turn stuff over to US editors I'm reminded of the things in our use of language that differ. Even certain phrasings can connect to a specific place. For the life of me right now, I can't remember it (I have a major headache) but there was an expression I used in the manuscript I was questioned on. In the east-west divide, I use all sorts of sayings Kevin's never heard of before. To me they're perfectly normal. To him, bizarre. In fact, someone said to me one of the reasons they weren't crazy about one author was because the author (British) set their work in the US but used Britishisms in the language of the book and dialogue. The person told me that in their opinion, as an American, if an author was going to set the books in the US and have American characters then their Americans shouldn't sound like Brits.

So it kind of cracks me up when people go on a tear about not using any brand names because it'll date the work, or not using anything that makes it too location specific... Yet what's one thing constantly harped on? Make setting a character. Make it come alive. How do you do that unless you touch on the things that define that setting? Fifty years from now some of the restaurants Tess Monaghan eats in in Baltimore might not still be there, but the inclusions make the books resonate with a sense of authenticity. Cities even change over time, as buildings are ripped down, new ones are constructed. Ask anyone who's set anything back in time a bit - even just a couple decades - and I suspect they'll talk about the painstaking research to make sure the world they portray is accurate to the era.

I don't want pop culture references up the wazoo, but some books automatically bring you to a sense of place and time. That's part of making the reader feel they are right there, and I think it's important. It is why I prefer to set my work in places I know - not so I can inundate with unnecessary local references, but so that I can get the senses of the setting right.

It does come down to balance, doesn't it? If you remove all the specifics then you have nothing. And it's the specifics that make stories universal. Though I'm still not a big fan of brand names, probably because I like to remove them from my day-to-day living as much as possible.

I think you can also make objects or locations have that kind of detail that makes things come alive without referencing brand names. It's a case of working personality into something. Maybe those pants could be hanging around her hips like a trapeze, rather than just being low-slung Calvin Kleins. Then again, it all depends on the character and what's important to them.

Permalink Reply by Sandra Ruttan on October 7, 2007 at 6:14pm
I personally don't do too much on the fashion side, because I'm hopeless and have no real fashion sense. In that respect, I'd go with you.

I think it is about balance. For some stories, the setting or the time period are critical, because they might affect how the law was applied and interpreted at that time, in that place. There might be racial issues we can automatically identify. If that has a bearing on the psychology of the characters and/or the storyline, then it matters. I don't think you should overdo setting or timeframe to the point it just feels tacked on. A book should include what's relevant, not a writer's self-indulgent tangents.

The example it's easiest for me to cite is actually my next book. The location is crucial. I can't say why, but it has to do with something that develops a lead in the story. In terms of country, not every place in the world would be an option. In terms of Canada, there are whole cities where the story wouldn't work. It's set in the Lower Mainland, and here's how specific it is: It would work in Langley, Surrey, Coquitlam... It wouldn't work in Vancouver or New Westminster, Burnaby or Richmond. A lot of people wouldn't know what it is about those locations that makes it that specific. I don't even aim for strict realism in a book, I aim for believability, but this was a technical issue that couldn't even be believable in some cities. The irony is, I don't even expect most people who've read the book to know or grasp it, but I know.

In other stuff I've written, the setting isn't as crucial. It could happen anywhere.