About Me:
Donna was born Donna Lee Baldwin on July 19, 1952 in York County, Pa. Donna graduated from Kennard Dale High in 1969 and married Robert G. Comer of Darlington, Md. on September 27, 1969. Donna has always been an avid reader. Robert notes that books were always prevalent around their home. The bookcase, shelves or even coffee table always had a Stephen King, Dean Koontz, Danielle Steele and others at her fingertips. After raising four children, the reading and writing never slowed. Donna has written several poems and many were posted in their local paper.
The year 2007 began with an idea! Donna believed she could write a book. The Suspense/Thriller novel, " A DAY FOR A DAY " had it's start. Robert again notes that though he was not interested in reading, Donna's desire to author her own novel was certainly evident as he found her at her computer every evening after work. Robert says after he read the first paragraph, he was hooked. He says, " It's as though she had been writing for years."

Movies And TV Shows I Like:
NCIS, CSI, FRINGE

A Day For A Day 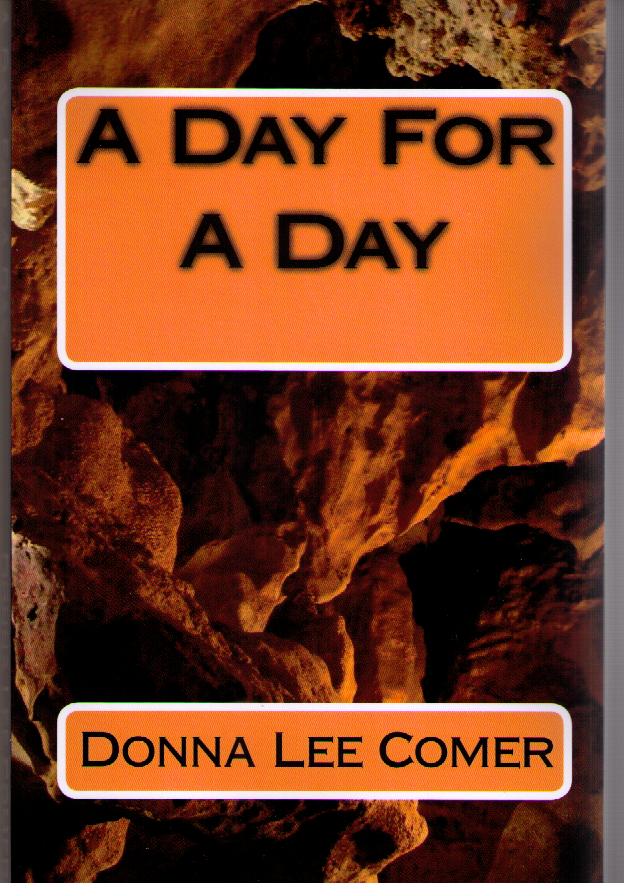 Here is an excerpt from the back cover-
(Maggie Taylor, a beautiful wife and mother, took her daughter Sarah to a local park. She had only walked away for a few minutes, but when she returned her daughter was gone.
Days later, after appearing on local TV begging for the release of her only child, Maggie discovered a crucial clue about the abductor. Shortly after, a man came to Maggie's home, drugged her, and took her captive, locking her in an abandoned shed.
Meanwhile, Officer Garret, who felt he was hot on the trail of the murderer responsible for little Candy Burns not a week before was now faced with the thought of not only having a serial child molester but could this man have kidnapped the much older Maggie Taylor? This was not the typical serial murderer he studied about. Once evidence is discovered linking the kidnapping of three teenage girls to this case the officer is left no choice but to consider he is dealing with one of the most dangerous men to have ever terrorized a small rural town such as his! ...... or were there two?
Maggie, locked away, is faced with the same twisted questions, feeling helpless and losing herself to the darkness alone in her rickety cell. Once, Walter, the man who took her reveals himself, Maggie realizes this is not the man who took her daughter.
Through a web of twisted truths in a chilling tale, find the answers to all the questions. Will Maggie be able to stay alive and find her daughter? Can Officer Garret decipher the clues to lead him to the right man responsible? Is Sarah still alive? Can good triumph over such a horrid evil on so many different leads?)

A Day For A Day can be found on my site http://www.donnaleecomer.com .... scroll down to Amazon link. Donna Lee Comer from Red Lion, Pa. will be featured in an article in her home town community newspaper. "THE DELTA STAR"Donna's new mystery thriller "A Day For A Day" will be featured as well as a short bio.… Continue

Thanks so much! -…
Continue

Thanks so much! - Donna Lee Comer

Hello everyone,
I am a new author recently published on Amazon. I live in Red Lion, Pa. I am a wife of forty years, mother of four and
grandmother of six.
I have been reading since school days and always wanted to write a book.
Finally back in 2007 I had an idea for a mystery/thriller fiction novel
and began writing.
I entered the Amazon Breakthrough Novel contest but did not make it to
the second round. However, my book has been published and… Continue