Anyone else here at Crimespace addicted to television's CRIMINAL MINDS? I love that show and have seen every episode at least once. It inspires me to write devious plots and horrible villains. Arne Dahl is now one of the most well-known names in Scandinavian crime. His novel Misterioso, which was recently translated into English, was one of the best novels we reviewed last year and definitely a 2011 favorite (Read the review here).We recently sat down with him for an interview about…

New issue of Kings River Life is up! We have a fun interview with Lee Goldberg, a review of "Mr. Monk On Patrol" & a give away of the book as the next part of our Road To Left Coast Crime 2012 series http://kingsriverlife.com/02/18/mr-monk-on-patrol-by-lee-goldberg/

Anyone Write Horror, Too?

The sequel to the fantastic 8 Days of Madness horror anthology (of which I'm proud to say I am a contributor) is looking for submissions.

Authors, this is an annual anthology hosted by Chris Allinotte - a terrific guy and bonafide horror guru.…

When I say greatest hits, I'm not talking Frank Sinatra singing My Way. A new museum opened recently in Las Vegas. The Mob Museum. It cost $42 million, and it opened on the 83rd anniversary of the St. Valentine's Massacre in 1929.

I didn't want to spoil your Valentine's Day chocolate with anything bloody or gruesome so I waited a day to put up the post. The museum features a thrilling lineup of mobsters, past and present, and their bloody exploits. Take a trip down memory…

A soft thud in the night. A creak in the hallway outside your bedroom. A lonely road cutting through a dark forest. All of these can cause fear. However, fear need not be felt in these creepy, eerie locations. One can experience fear when going in for a job interview, on the first day of college, or even writing your first novel. We fear the unknown. What made the thud upstairs? The creak in the hall–just the house settling or something else? What if the car stalled on the road? You wonder…

In my blog today I interview literary agent, Chip MacGregor

In my blog today I interview a truly fascinating man; super lit agent Chip MacGregor.  Had to ask a few questions about the publishing world, both traditional and ebook, and hear his assessment on the health of the industry.

Come over and check it out.  I think  you'll find it interesting.  Find it here:…

When is it OK to kill dogs - and other animals - in crime fiction?

There are two reasons people will be talking about The Wrong Delivery - Corrin's Eyes, by McDroll:

I receive many questions about the heroine in my Emily Stone Thriller Series.  I thought it might be fun to ask her a few questions.  She was my inspiration and creation after a personal experience with a real psychopath.  But enough about me, let us ask…

Forensics in the News

With the advancements in computer technology today, many improvements have been made in the law enforcement community for police related investigations.  The technology hasn’t caught up to the fascinating and lightening speeds of popular television shows, but nonetheless there are some amazing forensic developments.  It is good news for us, but bad news for the criminals. 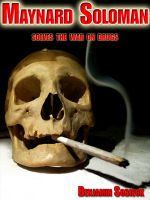 "Maynard is the philosopher-cum-man-of-action that we all wish we could be, the detective who solves mysteries by turning idiocy against itself." - Peter Rozovsky, Detectives Beyond Borders (Spinetingler Award winner)

"I recommend to everyone who is looking for a quick read. It's perfect…

Okay, it was the tag line on the cover of The Dispatcherthat grabbed me first....

"The phone rings. It's your daughter. She's been dead for four months."

I'll be appearing at Crimefest 2012 at the Royal Marriott Hotel, Bristol on Friday 25 May 2012 between 9am to 9.50am  when I'll be on a panel with my fellow crime writers; Frances Brody, Mary Andrea Clarke, Leigh Russell and Adrian Magson, discussing Genres and Subgenres: Where Do You Fit and Why? I'm sure it will be a lively debate just like the previous years panel discussions have been. They'll also be plenty of time for questions…
Continue

Istanbul:  the sight that greets Inspector Cetin Ikmen is horrific.  The girl was burnt alive in her own bedroom.  Was it suicide or murder?  When her father shows no emotion at the death of his seventeen-year-old daughter, Ikmen starts to dig deeper.

What "Justified" Got Wrong (And Right) About Kidney Transplants

Tonight's episode of Justified featured a creepy doctor bad guy taking both kidneys from loveable bad guy Dewey Crowe. To get his kidneys back, Dewey needed to find $20,000 in four hours - presumably the time it takes to die from a lack of kidneys.…

Happy Valentine’s Day!  Because I love you guys, I’m giving away the Kindle edition of the seminal Hannibal Jones novel.  You can get The Troubleshooter FREE today through Saturday! …

Having just finished writing the eighth in the DI Horton series, which is now with my editor, there was no time to rest on my laurels but it was straight on with researching the next DI Horton.

I finished DI Horton number eight (I’ll reveal the title soon) on 31 January and since then I’ve been working on the next Horton novel. I now have a rough plot outline, and I mean rough, and some characters sketched, enough for me to begin the creative writing process. I like to start writing…

Boston Cream is Howard Shrier's third novel featuring PI Jonah Geller, but a first read of this Arthur Ellis award winning Canadian author for me. It definitely won't be the last.