I now work as a scientist / engineer in a special unit of USAF OSI. We provide tech and analytic support to Special Agents throughout the Air Force on cases that are overly technical or too large for their regional office to handle. We provide the "heavy lifting" in the scientific and engineering subjects.

It's like Abbey on NCIS, except it's Air Force not Navy, and we cover the whole range of science on DoD and military programs.

For a mystery writer, it is great to now… Continue 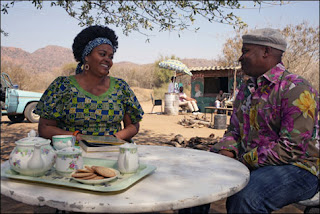 Every once in a while I like to just do a story on my writing blog that has no plan, no outline, and no clue what I'm going to do next beyond a very vague premise, and a couple of characters. I call it literary improv, and I don't do any editing beyond my computer's initial spelling and grammar check, so it is literally as raw as you can get.

This time around, it's a story I call Tooth & Claw, a fusion of Depression era outlaws… Continue

Marine Mystery to be published as unabridged audio book I'm delighted to announce that my third marine mystery featuring the flawed and rugged Inspector Horton, The Suffocating Sea, is to be published by Isis Publishing, the World’s leading publisher of unabridged audio books, as an audio book and digital download.…
Continue

I'm judging a contest again, and this one has a new result, at least for me. All the entries are fine. Good. Each has its moments. Each is fairly error free and nicely formatted. And none of them created even a spark of desire in me to read more than the sample.

This is what agents and editors must face every day, in fact many, many times every day. There's nothing wrong with the submission, but there's nothing intriguing about it, either. You know the story from the first few pages,… Continue

Meet Me Tomorrow at the Virginia Festival of the Book

I’ll spend tomorrow surrounded by friends in Charlottesville at the 15th Annual Virginia Festival of the Book. The Festival actually starts on March 18th and is five days of mostly free literary events open to the public, designed to honor book culture and promote reading and literacy. I attend Saturday for two reasons. One is the all-day Crime Wave portion of the Festival at the Omni Hotel. It features a series of panels and presentations from… Continue

A lesson in (mad) Mideast politics

On Global Post, I report on the fairly crazy mess (even by Middle East standards) in which both Israeli and Palestinian politics find themselves just now.

Guest blogging on A Book Blogger's Diary, I write about why my publishers like to have a new title for the same book in almost every country...Choosing one is almost as hard as writing the book itself... Almost.

In its listing of recommended books new to paperback, The New York Times features the second of my Palestinian crime novels A GRAVE IN GAZA, just out in softcover from Mariner/Houghton Mifflin Harcourt. (The UK paperback, titled THE SALADIN MURDERS, has been out in small format for a while already.) Here's what the Times writes:
"Omar Yussef, an aging… Continue

Match Pseudonym to the Genre

For many a year I was convinced I wanted a pseudonym. It felt like it added another layer to what I was doing, somehow upgrading the importance of what I wrote as this other entity. Atlas Soloman and Maynard Soloman were my two picks. I dreamed of exploding onto the scene as this anonymous writer.

"Who is this Atlas Soloman guy?" the people asked in my dreams. "I don't know, but I like his writing. He's like the Batman of fiction. What is his true identity? The mystery makes me… Continue

SHATTER launched this week Stateside, you may have noticed the ticker-tape parades and fireworks.

Given the current state of the US economy and publishing in general, I have everything crossed. It's a tough environment to gain any traction, but at least I have a house and a job. (Saying that, most of my friends don't think writing is a proper job. They don't understand how tough it is. It's like pulling teeth. It's like juggling hand grenades. Believe… Continue

In the last year, the best living detective writer.

This has been hammered out in some ways, but here's the question with the twist:

In the last year, the best writer of crime fiction you've read is? What did this writer bring to the table that made him/her so good?

Rate the writer: Five stars max. Five being, "Just goddamn the greastest writer since Print was invented!"
down to one star, which is' "Throw the frick'en book in the trash bin and start a big bonfire!"

I want to increase my library. I… Continue

I saw in Publishers Marketplace a story reporting B&N suffering thru a 7% decline in 4th quarter profits. And they're expect something a little less than 7% further loss in the immediate future. Yet they are still going to open between 10 and 15 new stores.

I don't know, but it seems to me there is something bascially wrong with this business model. The only way for growth is to constantly open stores--while at the same time, closing stores. Is this the only way to make money?… Continue

But It Makes You Feel Better

They'll tell you that awards and records don't mean much in the quest to be a successful writer. That doesn't stop people from listing anywhere they can that they were shortlisted for a prize, almost won a contest, or were once recognized by some organization for something slightly related to writing well. It helps us feel some justification for those 10,000 hours I spoke of yesterday.

Another 5 Star Review for 'A Study in Red'

In the space of 24 hours, my novel 'A Study in Red - The Secret Journal of Jack the Ripper' received two more wonderful 5-star reader reviews on the Amazon.com site.

I'm so grateful to those who have read and enjoyed the book and taken the time to place their reviews on the Amazon website.

I'm placing the first of the new reviews here and will post the other, longer one in a separate post another day.

It started out like a normal Saturday: grocery shopping, run a couple of errands, then home for lunch. Last Saturday’s first errand was a trip to the Post Office to pick up Express Mail that had been waiting since Wednesday.

It was a cardboard mailer, standard letter size. A book, I thought, though why someone would spend $25.15 to Express Mail a book for review was beyond me.I opened the… Continue

This is a debut Horror novel by Jack Kilborn. This is a gripping novel. I found it hard to put down once I started it. There are turns and twists, unexpected happenings, and relationships with very believable characters.

This book has everything from Red-Ops, a small town setting, and a hunt for a person. Does the person hunted for even exist? Are they in hiding? Where are they, will the townspeople tell where they can be found? What will happen if, or when the hunted lives, and… Continue

Who did you mimic?

There are some pundits who suggest a new writer first mimics, or outright copies, the styles of their favorite authors. Okay, that sounds like a plausible explanation in how to acquire your own style. So who was your favorite authors? And how closely did you begin your writing career in copying them?

Thank you to Mike Powell of BBC Radio Solent for inviting me to be his guest on his Sunday afternoon programme (15 March 2009) to talk about the unsolved murder of my great aunt, Martha Giles, who was brutally killed on 12 February 1959. I was also talking to Mike about my marine mystery crime and thriller novels.
Thanks also to those of you who were kind enough to e mail and text him to say how much you enjoy my novels, and to offer your support… Continue