Revenge of The Killer Duck

Well, there I was having an early morning walk around my local park, which, on a wet Saturday morning in Glasgow is relatively empty (apart from the odd dogwalker and the even odder jogger (I'm not in any hurry - a walk will do me thank you)).

Have just finished New Zealand author, Paul Cleaves new book, Cemetery Lake. Once again I am blown away by this guys talent. His characters are brilliant, the plots flawless, his writing style spot-on. I am making it my top priority to increase his sales in his own country, instead of leaving it to Germany to make him a best seller. He ranks up there with all the top crime writers and I cannot wait to see what else he has to offer.

I plan on reporting on the festival on my blog "Getting Medieval" if I'm not too worn out. I'll be going both days but it is a two hour drive there and another two hour drive back (strangely enough). Lots of driving and these are long days in the sun. But it's always an enjoyable time. No signings for me this year. Next year! Finally! I will be helping out at the Mystery Writers of America booth on Saturday from 10-11 am. Stop by and get a free bookmark. See you Angelinos there!

A Study in Red Now at W H Smith

UK Readers may be interested to know that 'A Study in Red' has at last been added to the catalogue of W H Smith. It can be ordered for home delivery or I understand that it is also able to be ordered for collection at your local W H Smith store. The book can be found at http://www.whsmith.co.uk/CatalogAndSearch/ProductDetails-A+Study+in+Red+-9781554045273.html&tab=1… 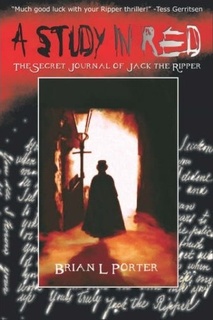 The books we love

Did you ever read a book that completely grabbed you in every way then haunted you for days afterwards? Of course you have because we all have. After reading a book like this you want to talk about it with someone, then, much to your dismay, no one has read it or, in some cases, has even heard of it.

This is just shocking really.

How could they not have heard of the best book ever written?

A few days ago Patti floated an idea out there. Seeing that some books… Continue

There's been some discussion of late on a certain chat group about grammar/writing rules. I don't argue on chat groups because someone always takes up the argument at much greater length than I would think is necessary or even desireable. Still, it made me think of speaking (or in this case writing) my piece on grammar and writing "rules."

In defense of Grammar Nazis: it's difficult to make rules for English, which is a mongrel language in the first place, for which we can blame the… Continue See you there, traditional mystery lovers! Hugs on request to any CrimeSpacer who attends my Saturday 10:30 am workshop or the signing right after it. :)

I’ll spend this weekend in the company of a lot of dangerous ladies. Friday through Sunday we’ll gather in Arlington, VA for the Malice Domestic Mystery Convention. Since 1989, Malice Domestic has been an annual mystery fan’s convention focused on the traditional mystery--think in terms of books best typified by the works of Agatha Christie. However they are a warm and welcoming group and even those of us who write private eye stories are made… Continue

I'm scheduled to be The Author at a high school career day. They sent along a list of possible questions, and one caught my interest: What is an average day in your job like?

Let's see. I get up, eat breakfast and read for a while. (You have to know what the competition is producing.) Then I read email and blog. After that, if things go well, I write for a few hours. That is, of course, in addition to doing housework, answering phone calls, and maintaining the people and animals in… Continue

Well, between home construction (done now, thankfully) and travel, almost another month has passed. Not that anyone is hanging on my deathless prose here, but I do feel an obligation to keep my blog current. So here's my attempt.

In the past month I've: moved into my new home office, signed one or two new contracts (don't mean to be blase, but I don't remember), edited three books for submission, turned in final edits on two more books, finished my WIP, started research on another… Continue

What Makes You Care?

I'm reading WATER FOR ELEPHANTS, and I love it.

Why? I don't know. I have no interest in the circus. When I heard about the book I thought, "Not for me." But I picked it up in a bookstore and read the first two pages. Then I bought it, and now I don't want to put it down.

It's that combination thing: good characters, people I can cheer for and identify with. It's description that makes everything crystal clear, sometimes evoking things I've experienced, other times… Continue

Relatively new to Pittsburgh is the Crisis Intervention Team. Unlike SWAT, this is not a “response” team. Rather it’s a “collaborative” team in which the Pittsburgh… Continue

My current writing and photography projects

This about covers things, except for publication of a few photos at an online mapping company and at a real estate agent's website for islands in Maine. Writing seems to be better than sleeping, most of the time..

Nearly nothing but novels: fiction and crime fiction book reviews
Chemistry for a sustainable world…
Continue