As always, the Maryland Writers Association Conference was a blast. Everything went smoothly, from Friday night's banquet and editor's panel to the mixer at the closing. The fact that my lovely wife Denise was the conference coordinator was merely a coincidence, of course.

It was also the first opportunity for anyone to see my latest book, a nonfiction title for authors entitled "Successfully… Continue

I recently ordered Adrian Hyland's Moonlight Downs. It was published in his native Australia as Diamond Dove. It really pisses me off when publishers do shit like that! Apparently, there's some writer out there with a Dove series, which I never heard of before reading the review of Hyland's novel.

What also makes me see red is when publishers change the contents of a book. J.K. Rowling's… Continue 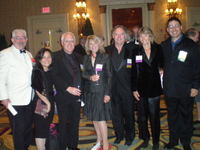 I'm stealing the above photo from Lee Goldberg's website. That's the SoCal contingent of MWA who attended the Edgars in NYC on Thursday evening.

The past seven days have been absolutely nuts, especially to think I was just sweltering at the L.A. Festival of Books last Sunday. It's just been seven days of books, books, and more books--giving me a very unrealistic view of the world since reading and book buying are reportedly down. I… Continue

I could care less if a faded and jaded country star ever had an affair (while underage or at any time) with a big time baseball player. If a teenage Disney sensation slaps her fans in the face by posing for a trashy cover on a national magazine. It makes no difference to me if flashy actresses and kinky socialites flame out on drugs and booze or if an actor in a respected crime series tanks his career with heroin and a pharmacopia of other substances. Frankly, none of those stories merits any… Continue

According to a report by a Pentagon panel, the dollar value of Army contracts quadrupled from $23.3 billion in 1992 to $100.6 billion in 2006. While the Pentagon outsourced hundreds of troop support jobs to private companies, the number of Army contract supervisors was cut from 10,000 in 1990 to 5,500 currently.

In what writer Naomi Klein calls “disaster capitalism” in her terrific book The Shock Doctrine, this collusion between the private sector and the Pentagon and the resulting… Continue 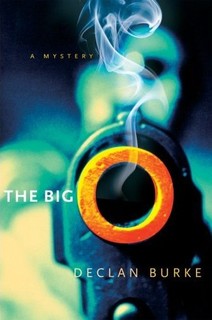 A Minister for Propaganda Elf writes: Herewith be the cover of the forthcoming U.S. edition of THE BIG O, which hits a shelf near you – providing you’re on the North American landmass – on September 22nd, with which the Grand Viz (aka Declan Burke) is tremendously pleased, as it was his favourite of the five options… Continue

The books we love part 2

Elizabeth Hand is one of the finest writers that we have. Her body of work has mainly consisted of SF/F but last year she wrote a mystery/psychlogical/thriller/dark/noir-ish novel called Generation Loss. It recieved a good amount of attention in print and in the Sf/F community but seems to have gone unnoticed in the mystery/crime fiction community.

Here is the… Continue

MEET ME IN MARYLAND TOMORROW

This weekend I’ll make my annual trek to Linthicum Heights, MD for the Maryland Writers' Association 20th Anniversary Conference. It’s a great opportunity for writers to hone their craft in sessions led by established authors, instructors, and experts, plus agents and editors will be available for individual critique sessions. Keynote speaker Tom Monteleone is a… Continue

L.J. Sellers offers readers a vivid and well-displayed look into a very disturbing and all too real trend. The style and dramatic flair of this author lend a wonderful edge to the book.

When an abortion clinic is targeted by "God's Messenger," one woman could hold the key to all of it, and she doesn't even know it. She's had enough loss in her life, so when her patients, young girls, begin dying all around her it takes its toll. Things really…

You know how I love to share reader feedback. This week I’d like to introduce you to Betty Hyland.

Betty is a fine author in her own right, writing as Carol O’Rourke. I met her when I spoke to the Writers of Chantilly not long ago. She took home a copy of The Troubleshooter and was kind enough to share her opinion on Amazon.com. Even her… Continue

Once again, getting my face out there has convinced me that it's vital to get your face out there. I spoke to a small group last night, for free, and didn't sell one book. That could be depressing after a long drive, but after my talk, a woman who had sat quietly to one side came up to me. "Have you ever considered speaking at ***?" She named a library in a town where I'd encountered a disinterested and snotty librarian. After three tries, I'd given up on him.

'A Study in Red - The Secret Journal of Jack the Ripper' has been nominated for the Authors Lounge Cover Art Design Awards for May 2008.

Voting has now opened, and runs tro the end of the month. Could I ask any of my friends who feel kindly disposed towards the book to visit http://www.talauthors.com/TAL/RomanceandMoreAwards.htm and if you feel the book cover has merit, to place a vote which would be greatly appreciated.

Cover artwork was by the brilliant Deron Douglas at… Continue

I have a short story in the July 2008 issue of ELLERY QUEEN MYSTERY MAGAZINE (here's a mystery, the July issue is published in May!!)

I'm very excited. It's a rather unusual story called "Murder on the Main Line" and is based on a woman I knew and loved -- except for the murder, of course.

If you read it, please let me know what you think.

I played hooky from the Citizens' Police Academy this week to attend the Festival of Mystery in Oakmont ,PA (near Pittsburgh). As always, it was a blast. Hey, a room full of authors, books, and readers...what's not to love? I also blog about the event over on Working Stiffs today, so come on by and check it out.

So, after my encounter with the duck at the weekend, here's the next chapter in the disaster area that is my life.

I got off the bus and was walking down a quiet street on my way to work this morning. Just in front of me were three council workmen picking up the rubbish bags from the offices lining the street, and throwing them into the back of a truck. One of the men was up the steps of an office building. He obviously hadn't seen me because in one move he turned round and launched… Continue