Crime and Mystery Guru Carl Brookins -- LIVE ON THE AIR
Carl Brookins wrote the book on radio interviews for authors..and I do mean he actually wrote the book. He writes so many books, features, stories and book reviews that to recount his career would take more space than Typepad can muster. Sooooooo....we're having him as our special guest this coming Saturday 2pm PDT on TRUE CRIME AND on Outlaw Radio! WOOO… Continue

Murder and Happily Ever After

I have a great quote from Scott Turow that I use in my mystery talks. To paraphrase, he says that the fictional courtroom is better than the real one in some ways, not the least of which is that justice is usually served. In real life, the courtroom often becomes a speech contest, a test of wills, a popularity platform, and/or an endurance test. While that may also be true in fiction for a while to keep the story going, there is at some point an ending where we know what really happened, and… Continue

this weekend I've got a double-header. I'm finally working with Books-A-Million this summer and I'm starting with the store in Potomac Mills. Saturday I'll sign my novels there starting at 11 am. Since this is my first visit there I'm not sure how long the books they ordered will last. Stop by during your summer shopping. The store is at 2700 Potomac Mills Cir, Woodbridge VA.

And not to slight my Maryland friends, I'll head for the Borders Books and Music in Waldorf on Sunday. That… Continue

John Searles, books editor for Cosmo, to keynote at the Backspace Writers Conference

Author and editor John Searles will present one of two keynote addresses at the 2008 Backspace Writers Conference in New York City this August. John is the Deputy Editor of Cosmopolitan where he oversees all book coverage for the magazine. His essays, articles and reviews have appeared in the Washington Post, the New York Times and other national magazines and newspapers. He is the author of two… Continue

It has been a wild ride this week, folks. The paying job is just about to kill me. Not literally but close.

I have one short out at Mouthfull of Bullets (thank you so much BJ!) and one at Mysterical E.

Things to do on your day off

Not Shave. Clean the rug...THANKS Rocky! Squeeze in a few chapters of Charles Williams, Touch of Death from the Hard Case Crime series. Got a back issue of Firsts Magazine in the mail! Nice article on some early noirs, such as Detour and an article on Horace McCoy. Joined CRIMESPACE!

So what the heck is an e-book? Oh come on! You’ve got some—I’d almost guarantee it. It’s a book in electronic format (Html, mobipocket, Palm or Adobe to name a few). It could be fiction or non-fiction—pretty much anything you can read in paper books. Still don’t think you’ve got one? I’d be surprised. Many computer and software companies are putting their manuals in e-format. My last mp3 player did that too.
But e-books are more than that. You don’t have to read them on your computer. You… Continue

June 5
I managed to pose with the lucky face of Hannibal at Mardi Gras World in New Orleans, though I am not sure which of us look most deranged. For the record, I'm not all that fond of liver.

The city experience was bizarre--from the Disneyland quality of the French Quarter to the psychotic bums on the ferry landings, it definitely was rich and ripe and crowded. I don't know how Bourbon Street looked before the hurricanes, but I felt like taking a hot shower after walking… Continue

I'm totally unable to understand the niceties of building a website. Luckily, I have a great guy I can email and say, "This is what I'd like" and he makes it happen. From time to time I tell myself I should learn to do it, but in my heart I know that (A) I'd never do it as well as he does, and (B) I'd hate every second of it. Let those who can, do.

What I love about having a site is that people have easy access to me without having real access. I've spoken at places where people say… Continue

Those who know me well will tell you that my love of music comes close to my love of a good mystery. So it's a pure joy to find a writer who handles both my great artistic loves with flair.

I met Raymond Benson briefly at a writer's convention, but it took me until now to get around to his rock and roll thriller, A Hard Day’s Death. Spike Berenger, who runs Rockin' Security, has to… Continue

I've written a piece called Post Mortem: Uncovering the Real Ending of The 50/50 Killer by Steve Mosby that posits a new theory of the ending citing textual examples.

I Made the Papers!

That's right. Finally the recognition I deserve... Or maybe they needed just one more Puerto Rican to round out the bunch. Anyway, they even used my photo which I did not at all think they would. Not sure if that helps or hurts, but have a look at the article for yourself.

This week was our final Citizens’ Police Academy class. I don’t think it has sunk in yet that our group’s time together is almost over. We’re a diverse bunch with a variety of motives for taking the course, but we’ve all bonded over the experience.

Our last class was another two-parter. For the first hour, we listened to Sgt. Keith Nemeth and… Continue

BookTour.com is the world's largest free directory of author events.
Like thousands of other writers, I've created a page showing my
biography, books and upcoming events. Readers can check the database
of author events for the best of what's nearby, or easily sign up to
track their favorite authors on tour.

Plus, there’s an easy way to invite me and other authors to your town,
or get in touch with… Continue

When You've Got It, Flaunt It

I've been known to complain about bad writing in this little spot, so I guess I have to admit it when I find a writer who can do it all. Allowing for my prejudices and such, here's my idea of a great mystery writer.

The main character has to be both real and heroic, at least in some way. She/he can have flaws, even big ones, as long as I feel as a reader that he's fighting them rather than indulging them.

Secondary characters also have to be real, and they can't be so… Continue 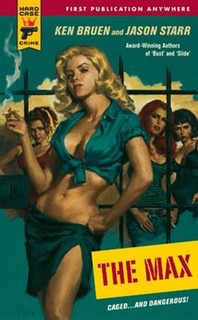 This week on Crime Always Pays: reviews of Adrian McKinty’s THE BLOOMSDAY DEAD and Declan Burke’s THE BIG O; free copies of the Ken Bruen / Jason Starr collaboration THE MAX; a Q&A with Will Hoyle; the first three chapters of Declan Burke’s spanking new interweb novel A GONZO NOIR; a sneaky peek at the new cover for Paul Nagle’s IRONIC; exactly how many shortlists has Tana French made?; and – oh… Continue

Today's the day! Freezer Burn is in stores now!

Freezer Burn, the third book in my Philadelphia-based series of forensic crime thrillers, is on sale now. Freezer Burn follows the career of rookie forensic technican Madison Cross, now on the job for nine months and trading in one set of problems for another as she takes on her toughest case yet.

Or as it says on the cover:

The Crime Scene Unit knows that even the most cold-blooded killers leave clues.

A bag full of body parts. A man thrown from a car. A… Continue

I should've used a pseudonym...

If I was thinking a little more clearly I would've used a pseudonym with my books. The most obvious reason: with a last name starting with Z, my books will be stacked on the bottom shelf of the mystery section, less obvious reason, everyone spells my name wrong--my publishers, reviewers, even friends of mine blogging about my books. I found a mostly good review for Small Crimes on the March 28th London Times review by Marcel Berlins, with my name given as "David Zeltresman" (and damn, I hate… Continue

Sometimes I think authors (myself included) can be pretty dense when it comes to marketing, at least in our efforts on social networking websites. It seems like whenever I get a friend request on myspace it's from another writer. When I get a comment, it's from a writer talking up his or her latest release. On Goodreads, when I get a book recommendation, more often than not, it was sent by the book's author.

I've never bought any of their books. I've never even gone to the library… Continue

Sometimes I think authors (myself included) can be pretty dense when it comes to marketing, at least in our efforts on social networking websites. It seems like whenever I get a friend request on myspace it's from another writer. When I get a comment, it's from a writer talking up his or her latest release. On Goodreads, when I get a book recommendation, more often than not, it was sent by the book's author.

I've never bought any of their books. I've never even gone to the library… Continue