Something Evil's Lurking in the Dark

“Raising the stakes” is the buzzword for thriller writers. Books that purport to tell authors how to write best-selling or breakout novels use the term more than “and” or “it.” Constantly raising the stakes is supposed to intensify the reader’s interest by making a successful outcome more important and less likely all at once. What it’s mainly doing is killing thrillers for anyone looking for more… Continue

I just posted a piece on my main blog for those who want to publish just for their friends and family.

Been a long while since I came here. Think I got lost somewhere back there on the A73. I had to live rough for a couple of years, sleeping in hedgerows and eating nuts, berries, and Monster Munch, but I found my way back.

To anyone interested, I have a new novel called STAIRWAY TO HELL coming out in August over here in the UK from Serpent's Tail. It is about a man who discovers a stairway that leads to hell. No, it is about an alternative universe where everything is reversed,… Continue

Kindle-less and e-reader-less, I'm just starting to learn about electronic publishing, even though all of my novels are available as e-books.

I attended an e-publishing panel at our inaugural California Crime Writers Conference during the weekend of July 13-14 and it was fascinating. E-publisher Marci Baun, e-published pioneering author Marilyn Meredith, and Poisoned Pen acquiring editor Annette Rogers were all there to give their take on the future of digital books.

Foreign correspondents are always more enthusiastic about Beirut than about Amman. Just like critics prefer “literary” fiction to crime novels.

It seems to me they’re both wrong, and for the same reasons.

I've Got a Horse Right Here...

Any gathering of authors ends up reminding me of the old song from GUYS AND DOLLS where three racing aficionados tout their choices for the next winner, each one certain that he's got it figured out. They end up singing over each other, an amusing number that's confusing if you actually want to hear the words.

Passing through crowds, standing in line, and seated at dinner at a writers' conference, what one hears is a succession of loglines, each delivered with the certainty that if… Continue

A Bär in Bern

Now that I tweet on Twitter and put updates on Facebook, I'm not nearly as good about blogging... (my publicist has found the coolest application that allows me to do all those sites through one place...)

But I've started a project that's worthy of a blog... Karen Althage, a breast cancer survivor, approached me about writing her story. She's amazing, and she's given me the motivation to write about something important, and something that ALL of us need to support. After several… Continue

By Steven Rigolosi
Tales From the Back Page #3

You will either love or loath Robin Anders, the narrator of the story. A self absorbed New Yorker, an upper crust snob, well heeled and pampered, eccentric and out spoken. Whose overblown narrative will either entertain you immensely or drive you crazy.

My second Palestinian crime novel A Grave in Gaza (UK title: The Saladin Murders) is just now published in Holland. The Dutch newspaper de Volkskrant asked me to contribute a list of my five favorite books, or at least those which've had the biggest impact on me as a writer. Here's what I wrote:

Let It Come Down – Paul Bowles

What are you willing to do to get published?

I'm not a romance writer, but after my agent's repeated suggestions, I wrote a romantic suspense. He says romance is selling well in the inspirational market and after my first mystery didn't sell, and I already had this romantic suspense book partly written (for an anthology,) I finished it. Now all I can do is wait, and rewrite my original mystery with a romance angle.

I'm not thrilled about turning my married protagonist into a divorced, single mom or three so she can find love… Continue

A comment from Dana on yesterday's post inspires today's topic: There is usually less time to write Books 2 through infinity than there was for Book 1. Book 1, according to the experts, is going to take an average of six years to get published. In those years we reread, rethink, and rework the thing, trying to get it just right for some agent or editor. Every word is considered, every sentence polished, at least if we're doing as we should.

Book Two starts the day Book One is sold,… Continue

WHY WE FIGHT: SAVE OHIO’S LIBRARIES These are grim times to be someone who makes their living with words.

I’ve already stood witness to the decimation of the newspaper trade. I’m watching the New York publishing industry repeat many of the same mistakes their newspaper brethren made the past five to ten years. Print journalism was pushed to the brink of financial self-endangerment well before the economy went south.

As I write this, Shaman Drum, a terrific… Continue

Watch the Video: A Grave in Gaza

The video blog Watch the Video features the clip I made for the second of my Palestinian crime novels A Grave in Gaza (UK title: The Saladin Murders). The rest of my videos feature on my Youtube channel.

Many writers make promotional videos for their books these days, as you'll see from the Watch the Video site. Most of them are made up largely of still photos and have quite a lot in… Continue

Another Cool Review of Russian Roulette

Russian Roulette has been gathering nice reviews and several have appeared on Amazon.com. Today I’d like to tell you about the review from Jennie Deitz Weingardt.

I knew Jennie when she lived much closer, and was a member of the Maryland Writers Association. She was a leader and hard worker as well as a fine writer and we served together on various committees.

Jennie has now returned to her home grounds in Huntington, WV where she runs a number of businesses and still… Continue

I Hate to Be Critical, But-

I guess I am. Just put down a book after 70 pages or so, and I'd say it suffers from the sophomore jinx. The author's first book won a prize, so I assume it was good. Maybe I should find it and read it, because #2 was just plain dull.

Does winning a prize work against an author, maybe? This book was so self-consciously pretentious and cloyingly historical that the story was buried in quaint characters and city descriptions. I imagined the author thinking, "They said my attention to… Continue

THE HIGH PRICE PAID BY COLLECTORS

I am a writer, a reader and a collector of books including some prized first editions. My first edition collection is modest. It includes The End of An Affair by Graham Greene (signed). Collecting books is a passion for many readers. For others it is an investment. Whatever your motivation for buying a book to add to your library price is always a consideration.

Since my books were published by various Thai publishers over the years, and the print runs were modest by large publishing… Continue

Not one, but TWO more 5 star reviews for 'A Study in Red' 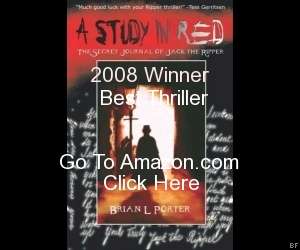 I'm over the moon to be able to report two more fantastic reader reviews for 'A Study in Red' on the site of Amazon.com These come just as the edits for 'Legacy of the Ripper' the sequel to the first book have been completed. I'm really grateful that people are still reading and enjoying the book and taking the time to add their own thoughts on it in this way. Here are the… Continue

Matt Rees is an award-winning crime novelist who lives in Jerusalem. Major authors have compared him to Graham Greene and John Le Carre. The French magazine L’Express called him “the Dashiell Hammett of… Continue

Language of the Bees by Laurie R. King

Be sure to read my review of her latest book, Language of the Bees.