Issue #4 of Astonishing Adventures has arrived at last!

Pulp is back and the fourth issue of Astonish Adventures is here.

I just finished 2 more from the Hard Case Crime series;

Shooting Star by Robert Bloch is a good natured and witty tale of Hardboiled Hollywood. A great read. 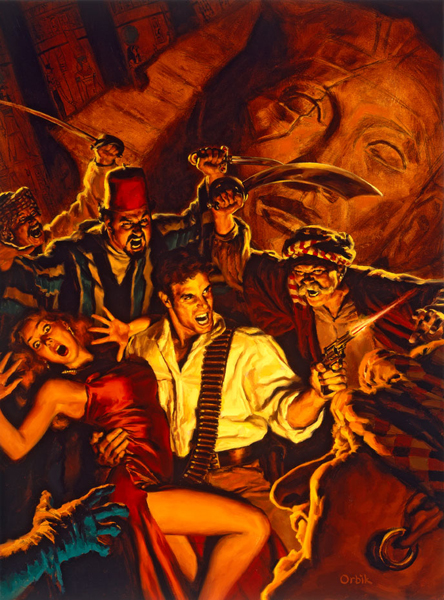 Today -- July 18th -- is the official release day of my debut book, NOX DORMIENDA. Still feels unreal to me ... and a little like a deep-sea diver with the bends. :) Physical copies still won't be available for about a week, but this is a rite of passage, a marking of time and a culmination of a lot of teamwork.

I'm celebrating by writing, but I wanted to thank Crimespace for being the first and one of the best places to meet people. I've made friends here I plan to have for a… Continue

Does That Scanner Make My Butt Look Fat?

Reading in the Chicago Tribune today about the full body scanner the government will soon have in place at O'Hare to check travelers more completely for hidden weapons and/or explosives. Fully body scanner. Wow. Sounds like something out of Star Trek, doesn't it?

The writer describes the machine's function as providing a "virtual strip-search," of passengers, though he says the face of the person being scanned will not be visible, nor will the images be retained in the system. From… Continue

I already told you I'm signing at Borders in Ronald Reagan National Airport this afternoon, but now I want to tell you about one of the Advance Reader Copies (ARCs) I picked up at Thrillerfest.

In the world of thrillers, almost every book has a good tag line. My pick for best of the year is on the front cover of the ARC of "Angel's Tip" by Alafair Burke. How could any thriller or mystery fan pass up a book… Continue

Mend Your (Writing), Lest You Mar Your Fortune

It's a line from Shakespeare, and correctly done it's "Mend your speech ..." As writers, we communicate on paper, but we still need to consider words, individually and collectively.

I used to teach high school, and often a student would object to my request that they clarify a sentence like "Mr. Jones saw several worms looking over his tomato plants." Invariably the cry would be, "But people know what I mean."

Possibly. But as a writer, your job is to make the job as easy… Continue

Hi, Everyone. I've pretty much read all of Anne Perry's Victiorian era novels. Anyone have any suggestions for new authors or series I could try out, please? I don't like novels with graphic sex or really bad language, which is why I prefer to read historicals. Or is there someone in the network who writes these type of novels? Regency, Victorian, Gothic, Romantic Age: anytime in the 19th would interest me. I'm not too fond of Westerns, however, although I love horses.--I cannot say… Continue

It's too hot to think today (90 degrees, and I wilt at 80), so I'm going to take the easy way and post Publishers Weekly's review of Black Ship (due in Sept):

At the start of Dunn's diverting 17th Daisy Dalrymple 1920s mystery (after 2007's The Bloody Tower), Daisy and her Scotland Yard detective husband, Alec Fletcher, have inherited a large house from Alec's… Continue

If you read my blog very often, you've read this before: the first step in editing is time. When your first draft is done, you get a feeling of relief. There. It's down on paper. It's done. However great that feeling may be, don't let it lead you to the mailbox. This is NOT the time to send your work to an editor, an agent, or even a friend. First it needs to sit for a while.

Walking away from a piece of writing is essential. I'm not sure how long it takes to be able to look at it… Continue

Meet Me tomorrow in DC

Tomorrow afternoon I greet the folks going into or dropping out of the friendly skies at Ronald Reagan National Airport. From 1 pm to 3 pm I'll sit in at the Borders Booksellers in the airport. Departing folks know the Washington National airport is really in Virginia. Those landing there don't really care. But either way, if you're traveling Friday in our area, stop by and get a book signed and I'll tell you where to get a great meal while you're here. Just Whose Fault Is It?

Just because I nearly came close to doing the same thing when I was a brand new deppitty sherf, the headline of an AP story this morning caught my eye.

The A.P story, however, didn't match the headline. Turns out the car was parked in the hapless officer's own driveway when some goofball who "tested positive for drugs" ran into it and then hit a tree. The now car-less copper was not behind the wheel.

Reminds me of… Continue

There are times when you walk a really strange road as a writer, going down some dark paths and scary, twisty highways. As authors we do things to our characters we’d never dream of doing in real life. We make them suffer in a myriad of ways--from the agony of emotional wringers we hope never to experience ourselves to very physical torments.

I kill people…in my books, anyway. I’ve had my characters kidnapped, beaten, burned, cut, threatened, tortured and just about any and every… Continue

A Great Book I Didn't Write

Lately I’ve been exploring crossover fiction (at the suggestion of my agent who says these books are hot) and I must admit I’ve enjoyed what I found. This week I want to share a lost classic that I found in my local used book store (Burke Used Books if you live near me.)

How is it that some authors grab you by the sleeve and won't let you go, while others only provide a pleasant diversion that can be set down at any moment to do something more pressing?

Laura Lippman does it; Barry Eisler too. It could be in Lippman's case that she writes as I think, pulling up details that seem like they came from my own brain, but in Eisler's work I have no frame of reference, being neither Asian nor a hired assassin. So it must be something else, and I call it… Continue

This week on Crime Always Pays: is crime fiction recession-proof?; the ‘Irish mysteries’ issue of the Mystery Readers Journal; free copies of Tony Black’s PAYING FOR IT; what did Aeschylus (right) ever do for us?; Martin Edwards Q&A’d; Adrian McKinty on Jim Thompson’s Okalahoma; THE IRISH WAR ON DRUGS; Tana French’s THE LIKENESS and John Connolly’s THE REAPERS reviewed; Patrick Shawn Bagley writes crime fiction poetry; and the Grand Vizier… Continue

Update on the Writer's Life

Thrillerfest was an almost impossibly good time. I got to talk to all the names: Sandra Brown, Harlan Coben, Kathy Reichs, Barry Eisler, Patterson, Baldacci, Von Lustbader... there isn’t space. The panels were wonderful, including the one I got to be on. The interviews instructive and the banquet top notch. But I must admit that the best part for me – even above the weapons demo given by the ATF - was chatting with my agent, who happens to be married to an editor at Tor. I also spent some time… Continue

Confessions of a History B(L)uff

When I was in school, my favorite subjects, not surprisingly, were literature and creative writing, followed by assorted languages (all modern). On the flipside, I hated history. Not because I had a hard time memorizing all the names and dates, because I didn’t. And as a child of parents coming of age in occupied Europe, I even understood the importance of learning from the past so we avoid making the same mistakes in the future. But really, did I have to know the exact day Marie Antoinette was… Continue