And late is the operative word here. As I recall I finished Tree Huggers in June of 2004. But it's going to be in print soon. My publisher (Zumaya Publications) is talking next month and I'm hoping for the best. But I know stuff happens. So I'm just saying soon. Very soon.

Good morning, everyone! Thanks to all of you who made a "friend" request. I'm really tickled about that. Looking forward to meeting you and reading your writing.

Right now, I'm working my way through an assortment of LGBT mysteries from Amazon (my VISA hates me). Richard Stevenson, Anthony Bidulka, Mark Richard Zubro and more. I'm also reading Josh Lanyon, and I've gotten a copy of "Writing Mysteries" (ed. Sue Grafton). As soon as I find some time to really sit down and study, I'll… Continue

Review for Blue Heron Marsh in The Coast Magazine

The Coast Magazine supplement of The Virginian-Pilot Newspaper

He's not as honorable with women as mystery writer Robert Parker's Spenser. And he doesn't have the dry, drunk angst of James Lee Burke's Dave Robicheaux, but Douglas Quinn's Webb Sawyer is a memorable man in his own right.

Why We Do It

Our weekend guest blogger Kate Flora pointed out a few realities that we as writers do our best to ignore.

I'm the newbie in this bunch of bloggers–the only one who has never seen a book of her own in print. It's something I'm looking forward to, and apparently I had better enjoy it, because that may be the high point of the whole writer's experience. After that it's going to be a long downhill slide, spending time and effort and money on…

Shep's tracks were seeping, causing his left forearm to stick to the sleeve of the Member's Only jacket that he just scored from the Catholic Charities clothing room.
Carefully, he rolled both sleeves up to his elbows, and checked the damage.
"Infected. Shit." He mumbled, as he made his way down Rush street, looking for a restroom to clean his wounds. He cursed himself for picking a "cool" jacket over a warm one. November nights in Chicago held nothing but bone chilling cold for…

Vampire as a private eye? Yeah, right. It works, though, in Charlie Huston's Already Dead which I completed last Friday. It's a bit too long and there's not enough plot for me, but Huston's style is quite good and moody at times and he also shows being capable of Ross Macdonaldish moments that seem quite essential when we talk about private eye fiction.

Just now reading Arthur Maling's From Thunder Bay (1981). Anyone? It seems pretty good, a bit Dortmunderish, but not as funny. Lots…

Review - Maigret and the Idle Burglar

Penguin have released a range of classics under the "labelling" of Red Classics. From their website:

"From
the Da Vinci Code to Jonathan Strange, from chick lit to crime, there
are so many bestsellers bursting onto the scene every week it can be
hard to decide what's actually good, as well as being a good read. The
sort of book that might change the way you think and feel forever, as
well as making your train journey home a bit more… Continue

It was a clear day, and if you looked down the street you could see all the way to the Ocean, but not as far as little Velma had gone

Crime fiction is such a pleasure, the psychology of this sometimes troubles me (but I know I can quit whenever I want to).

In writing about fiction over the past week on my regular blog, it is amazing to realize which authors slipped my mind, and joining this site has reminded me of many (Raymond Chandler, for example). This, in spite of the fact that most of what I've talked about is crime fiction. But I'm looking forward to finding out about even more books from the posts and sites… Continue

Sailing, a metaphor for writing

This past Saturday, Sept. 22, my friends Burt Hansen, Paul Clarin and Jim Linder, helped me move my 36-foot sailboat, Mustard Seed, to the boatyard on Stock Island. As the eagle flies, it’s about a five-mile trek; as the boat floats, it’s at least double that.

Burt and I have sailed for years. He and his wife, Nadja, have sailed all around the east coast delivering boats and he has worked at boat sales at various times in his life. He is a weathered sailor I always learn something…

I will have prizes!

That would be Nine Months before the Release of my book. I thought I’d share with you my efforts to market A Hotel in Paris prior to the release date.

My Web Gal is adding an events page to my website, since I have already… 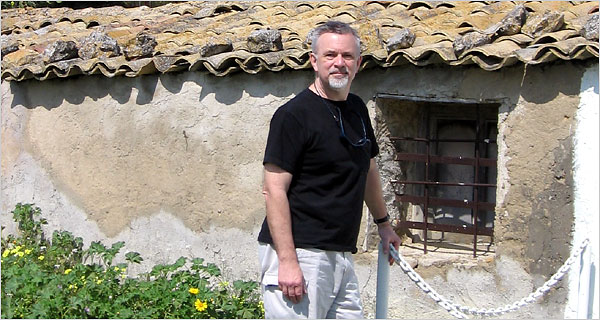 Translating fiction/Can I handle a day without murder?

In my latest post on http://nearlynothingbutnovels.blogspot.com/, I describe a great site on translation that I came across. It contains further links to discussions of mistranslation, including mistranslation of dialog to film subtitles. Related sites have also come up in subsequent comments. You might enjoy stopping by to learn about these sites.

I also report on a site from Robert (Bobby) Baird of Chicago. This site has some wonderful writing and great photography. Bobby edits a… Continue

Every now and then you get a review book that just takes you somewhere
you never thought you'd go. This year I've been really lucky to read a
few of these - Let the Right One In by John Ajvide Lindvquist and now
The End of Mr Y by Scarlett Thomas is something I didn't think I'd ever
read, and something I would have expected to actually like even less!

A Cajun Halloween Party -they did it for Harry Potter, They can do it for Pinch & Scrimp

HALLOWEEN PARTIES BUILD NEW ORLEANS LIBRARIES. You did it for Harry Potter, you can do it for PINCH & SCRIMP!

Bonjour, my Friends; it’s me, Lyn LeJeune, author of…

For years the corporatists and their toadies in the Republican Party have whined that government regulation and labor laws are a plot by liberals to hamstring American business. But now, we have China.
China is a Petrie dish on whose face a new outrage grows with regularity. They put poison in our food, our pets' food, and send us dangerous toys. Their food and drug laws, if any, are unenforced. They use tainted or dangerous materials with impunity.
If they have workplace health and… Continue

This week at Schaumburg Twp. Dist. Library we had the pleasure of listening to authors and policemen Michael Black and Dave Case talk to an audience about crime scenes. They set up a 'body' and a 'scene' and the audience helped 'process' the scene. We had about 115 in attendance. This is an enormous reponse for us for an author program, and we were thrilled with the entire event. If you have not heard these gentlemen speak at LIM, make it a point to do so. I can't believe what an excellent… This week, I’ve been thinking about Cinderella.

I’ve been thinking about her a lot, wondering how long she stayed "happy" after she landed the Prince and the castle? Was it eternal bliss, or did she eventually go back to worrying about more mundane matters, like pesky royal in-laws, or her pecking order at court? In a real-life example, Princess Diana certainly showed us that sometimes there's nada happily ever…

Why You DON’T Want To Be Me, Even Though You Think You Do…

Almost since my first book, Chosen for Death, in 1994, I’ve been teaching writing for various organizations throughout New England. I think I’m very lucky. I’ve had a lot of wonderful students. I’ve also had occasional students who didn’t want to do the weekly writing assignments, but only wanted to sit there, pen poised, to write down the magic advice which, when followed, would transform them into best-selling authors. At library…

Hey all. I just wanted to let you know that Eureka Point is no longer available at Lulu. I signed contracts at Red Rose Publishing for both Eureka Point and My Very Special Agent (yeah!). Release dates will be posted when I find out the definite details. Have a great weekend! Hey Douglas, the blue heron was around today, fishing again.