It is that time of the year again, it is Labor Day Weekend, and some people claim summer fun is over! I disagree!! The kids are back to school and that means…peace and quiet. Yes that forgotten lack of noise that
comes from the little rugrats or adolescents playing their video games. I for
one love our children, but don’t mind a little less noise and distractions. I
am getting old I guess. So, not to bore you anymore with any more of my ramblings,
here…

My novel The Kult was optioned last year, and shooting starts in a few weeks (September 27th). There's a website with all spangly things on like video interviews with the cast and sample music for the soundtrack. If you're interested you can check it out at www.thekultmovie.com and you can add the film as a friend on Facebook at www.facebook.com/thekultmovie

How to Write the Great American Leaflet:


1. Stare at a blank screen for forty-minutes.


2. Place fingers over the keys, poised and ready for when inspiration strikes.


3. Check the internet for mail.


4. Get serious about writing and return to your still blank screen.


I'm new(ish) to the world of ebooks. Up to this point, many authors have felt ebooks were the second string player to traditional print media. These days, though, e-everything is taking off and books in digital form
are no exception. Every maker of the reading devices has upped their game and
the gadgets themselves are of such high quality now. As such, the marketing of ebooks has taken to
the Internet,… I'm starting to get so techno-savvy, it's frightening! I've just uploaded my very first video on this site (and youtube, blogger, twitter and facebook). I'm now the proud owner of a blog and will soon have Down Among the Dead Men out as an ebook. This is the second novel in my humorous Rafferty & Llewellyn crime series and was first published by Macmillan/St Martin's Press and Worldwide in 93/94 and is long out of print. Now it's going to get a whole new life as an…

The number of words in this post is going to be few. I am at a loss to adequately describe what I got to be a part of .The X-Men have been a big part of my collection from the number one issue. They were one of the
cornerstones of the collection I had till I had to let it go. That being said
this graphic novel is probably one of the best executed graphic novels I have
ever seen. It is just that good.


The team of Joss Whedon and…

How nice to find a belated review!

THE CONVICT'S SWORD was released a year ago, my last book with Penguin. I didn't get as many reviews as I'd hoped for, given that I was prouder of that novel that any of the earlier and well-reviewed books. Now I'm with a smaller publisher (Severn House) and reviews are even harder to come by. So I really didn't expect the pleasure of getting a review on last year's novel, and such an intelligent and well-written one one at that.

You may read it here:

In the mood for a good thriller, my wife Jeanne and I went to see George Clooney’s latest star turn, The American. All I can say is don’t bother. While I
don’t normally write movie reviews, I do write thrillers (The
Cutting, The Chill of Night) and, as a
thriller-writer, I expect a thriller to have a plot. Not necessarily a great plot. Not even a good plot.…

Notes from the EBook Revolution

Ok, well, six months ago I hardly knew what an e-book was. Now it's changed my life. Here's how!

In the mood for a good thriller, my wife Jeanne and I went
to see George Clooney’s latest star turn, The American. All I
can say is don’t bother. While I don’t normally write movie reviews, I do write thrillers (The Cutting, The Chill of Night) and, as a
thriller-writer, I expect a thriller to have a plot. Not necessarily a great plot. Not even a good plot. But at least… Continue

The Inquisition, the Jews of Andalus, and Columbus: 'By Fire By Water' review 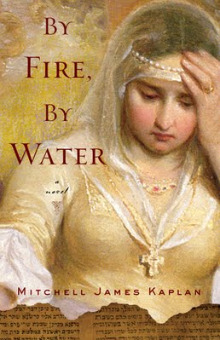 Historical novels vie with crime and romance novels for the titles of most derided and most widely read literature. They've had a bad rap ever since the 19th century, when the swashbucklers of Alexandre Dumas looked pretty wooden next to Dickens, and cartoonish in comparison to the depth of Victor Hugo or George Eliot. There have always been marvelous exceptions, such as Mary Renault's amazing novels of ancient Greece, but for much of the last century, historical fiction was…
Continue

Who owns the e-book?

The battle over e-book rights is the topic of my latest blog on “Another Writer’s Life.” What do YOU think about it?- http://bit.ly/M6MdU

Dead Man’s Wharf will be released in CD, cassette and as a download early 2011. It follows the earlier release of…

Hang some gaudy crap from the ceiling, because my site (http://www.benjaminsobieck.webs.com) has been renovated. I'll summarize as the paint dries.

Getting this post started was a tough one for me. I received an opportunity to read a novel by Lee Goldberg that he had penned a few moons ago, how many I am not sure. I think
most good novels are not like bread and don’t have a shelf life and get stale
and moldy after a certain date. The Walk
was originally printed in January 2004; mine was printed August 25, 2010. The
new technology is amazing. But I digress yet again.…

Once again I had far too many movies piled up on both the DVR and my “To Be Watched” Shelves and a lot of those were film noirs that I’d never seen. Combine that with The Film Noir Foundation bringing their Noir City Film Festival back to Chicago and… time for a three-week marathon.

Here’s the list of what I watched, you can scroll through my blog to see what I had to say about each film.

My blog is here:… Continue

A motorway service station on the M1: dimly lit, run down, poorly supervised, flickering lights, dark corners; a favourite stopover for long-distance lorry drivers on their way up north from London. Behind it, a body is found in a ditch, that of a girl barely out of her teens. She appears to have no family,… Continue

Meet Me Saturday in MD

Saturday I'll visit old friends at the Borders in the Boulevard at the Capital Center. Their expanded African American interest section is at the front of the store across from the music department. I'll be signing my novels from 2pm to 4pm, right after their noontime special story time for the kids. Stop by… On my book tours I often venture to places few others visit. There are book festivals in tiny provincial towns. Readings at bookshops in small rural villages. This week I spoke in a German town that many Germans are convinced doesn’t even exist.
Bielefeld (population 330,000) is a town in North Rhine-Westphalia. Or is it?
Since the 1990s, there has been a widespread internet campaign to convince Germans that this town…
Continue