What's on in March - win a copy of DI Andy Horton, Death Lies Beneath, talks and writing

This week there is the chance to win a copy of DI Andy Horton number eight, Death Lies Beneath, which is being offered on the Crime Readers Association (CRA)… 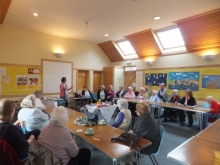 A visit to the newly refurbished Sandhurst Library in Bracknell Forest on 4 December was the perfect way to finish a busy year of talks and public appearances in 2013. Not only were the audience lovely and packed with some die hard DI Andy Horton fans but after my talk about murder, crime and bodies there was a gorgeous English tea complete with cucumber sandwiches, scones with jam and cream,…