Part two of an interview I did with E.B. Davis over at Writers Who Kill is up.
Drop by and leave a comment. You could win a signed copy of Murder at http://www.writerswhokill.blogspot.comTimber Bridge or Where the Dreams End.

BOGO yup. Buy One Get One FREE!

You can stop by KdBlog this week to get the secret code to your free book. Just follow the directions, purchase either Where the Dreams End or Murder at Timber Bridge from the KDWrites Store and until the end of the month you'll receive a free copy of Nine Kinds of Trouble.

It's not too late to win!

Read Drop in to win and leave me a message about www.kdwrites.com
Or stop by http://www.thestilettogang.blogspot.com and drop me a line and you could win a signed ARC of Murder at Timber Bridge.
KD

Drop in to Win

Hi guys,
To celebrate the upcoming release of the print version of Murder at Timber Bridge I'm giving away a signed ARC. To qualify, just drop by www.kdwrites.com and tell me the thing you like best about the website, or if something really annoys you, tell me the thing you like the least. it's time for website updates and I'm looking for feedback.
I'll draw a name from everyone who comments and one lucky winner…
Continue 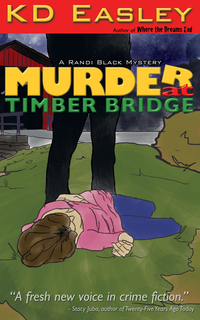 This week on KdBlog stop by and meet Suzanne Adair.

This week's Tuesdays with Friends guest is Helen Dunn Frame. Stop by and say hello.
www.kdblog.typepad.com

Hi guys,
I'm starting a new feature on my other blog, KdBlog, called Tuesdays With Friends. It's the day I invite another writer to take over the blog and run with it. It's a chance for me to make new friends, and a chance for other writers to talk about something that interests them and to promote their writing to a new set of readers. If anyone on Crimespace is interested in becoming a KdBlog Tuesday Friend, shoot me a message.… Continue

My name is KD Easley, and my mystery novel, Where the Dreams End came out in August of 2009. My promotion efforts have been small thus far, mostly social networking sites and word of mouth. So, now I'll give Crimespace a try. I love being part of a social networking site where everyone here is a mystery fan. I kind of feel like I've arrived home.

So far, I like Crimespace. It's easy to use, friendly and I hope to meet some new mystery fans here, but do I really have time to maintain… Continue