Though I was beginning to become angry with it, because the three wouldn't leave Tucson! I was going to go to the Hillerman Conference (I didn't win BTW). I paid for a chapter conference with Judith Van Gieson. I kept that. We spoke this morning.

It was a very helpful time! She re-energized the novel, bringing me focus. Like using two POVs because both characters (Natty B and Dia) are great characters. So I can't wait to work on it in Paris!

I am again participating in the National Novel Writing Month in November. I'm very pleased with my progress! Unlike the frenzy of last year, I have over 20000 words. I need 50000. No sprint to the en…

I am again participating in the National Novel Writing Month in November. I'm very pleased with my progress! Unlike the frenzy of last year, I have over 20000 words. I need 50000. No sprint to the end at this rate!

As I've mentioned, I am seriously madly in love with my mystery novel in progress: Snaketown. I am looking for a mystery writers conference which is about new writers. I don't want an agent or schmooze one.

Looking for a decent mystery writing class. Gotham? Seems like a factory. Also, doesn't seem to read students work. Somewhere else? I don't want to go back to school.

Am I dreaming? All suggestions gratefully received and appreciated! I don't even remember entering, but it's been a busy couple of months. 'Scuse me, my feet are killing me!

Took me five minutes to find out how to write a new post!
I am selling some things on ebay. Have a look if you would like. I collect Charms, and I am selling lots, both Sterling and silver-tone.
I am also FINALLY doing the reading I need to for Snaketown and the research on ceramics. I have to resist the temptation to actually try to throw a pot or two! I'm so easily… Continue

I'm not good at this!

Happy new year to all! The best of everything. My motto for this year is:Do One Thing Well. For the first of the year, that will be reading books to help me write better, write more knowledgeably and finally to finish Snaketown for the Tony Hillerman contest in June. I"m stoked because a friend read the horrible first draft and said she loved it! Now, I think the chili is burning.

I could have sworn...

But I am probably wrong. No posts. Here's one!

I am involved in NaNoWriMo. I really like my murder mystery, set in AZ and it's about, among other things, the Hohokam (who dispersed not disappeared). I make some interesting points about them, because they're my favorite ancient civilization. 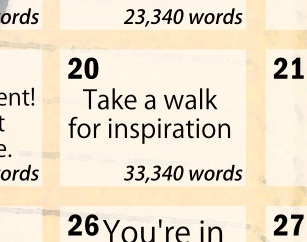 I've lost a lot for various reasons, but now I am very happily at the… Continue