Two of my co-editors on The Lineup: Poems on Crime #4 decided to step down as their own projects and day jobs have gotten busier. In turn, I've decided to move on to a poem-of-the-week website format I'm calling The 5-2.

The guidelines are at http://poemsoncrime.blogspot.com/p/submission-guidelines_04.html

THE LINEUP: POEMS ON CRIME #3 now on sale

THE LINEUP in stock at Murder By the Book (Houston, TX),… Continue 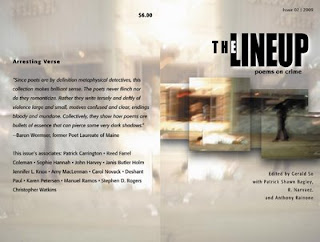 The Lineup: Poems on Crime 2 is now available for $6.00 USD from Lulu.com, and will be in stock soon at Once Upon a Crime in Minneapolis and Murder By the Book in Houston.

You can hear poems from Issues 1 and 2… Continue

PSYCH: A MIND IS A TERRIBLE THING TO READ by William Rabkin

I'd been curious about this novel since the news broke last January it would be written. I was most curious how author William Rabkin would handle Shawn-Vision, Spencer's ultra-perceptiveness shown on TV in extreme close-ups and highlighting. I'm happy to report it's delivered quite smoothly (e.g. Shawn looked at the truck driver and he saw. Saw the chafing on his face. Saw the redness in his eyes.") as is the interplay between Shawn and Gus, the heart of the show.

What I'd heard of… Continue

THE SHANGHAI MOON by S.J. Rozan

Just back in New York having spent a month in California for a relative's wedding, Lydia Chin is put on the trail of a storied brooch by her P.I. friend, Joel Pilarsky. Their client is Alice Fairchild, a specialist in the recovery of Holocaust antiquities, who claims to work for heirs of the brooch's owner. When Pilarsky is murdered shortly after leaving a message for Lydia, she must pick up the trail with Bill Smith, four months estranged from Lydia after their last case (Winter and… Continue

The highest compliment I can pay Quantum of Solace is I believed the conceit that it picks up twenty minutes after Casino Royale. Daniel Craig, Judi Dench, and the other returning actors are on their game. The overarching mission to uncover the organization behind Mr. White drives the action at the same breathless pace. I wouldn't mind if all Craig's Bond movies kept this continuity.

As a fan of USA Network's Burn Notice, I've wanted to read this tie-in since last November, when I heard Tod Goldberg was tapped to write it. The Fix has burned spy Michael Westen reluctantly helping an aging socialite who's been swindled out of a sizable chunk of her fortune. He also encounters a femme fatale from his past who accuses him of implicating her in a crime. This last has to do with the falsified dossier (from the TV series) that got Michael burned in the first… Continue

A routine fire evacuation turns up the body of Lionel Byrd, who, three years earlier, was cleared of suspicion in the murder of a prostitute thanks to evidence found by Elvis Cole. Byrd is now found in possession of an album containing grotesque photos of seven murders, including the one Elvis investigated. While everyone else easily accepts Byrd was the killer, Elvis is driven to find out for himself.

THE LINEUP #1 On Sale

Patrick Shawn Bagley, Richie Narvaez, Anthony Rainone, and I have finished editing The Lineup: Poems on Crime, a 6" x 9", 44-page chapbook featuring work from 14 poets including Bagley, Ken Bruen, Crimespace's own Daniel Hatadi, and me.

The Rap Sheet's J. Kingston Pierce recently invited me to wax a bit about the project's history, and about the place of crime in poetry.

Copies of The Lineup are available from… Continue

GO-GO GIRLS OF THE APOCALYPSE by Victor Gischler

Out tomorrow is Victor Gischler's new novel of what happens after the end of the world. In the near future, divorced insurance salesman Mortimer Tate decides to stock up on guns and goods and wait out Armageddon in a mountaintop cave. Nine years later, he feels the urge to come out of seclusion with the quixotic goal of finding his ex-wife Anne.

I'm a longtime fan of Victor Gischler's work, but even if I weren't, I wouldn't be able to resist the title. To describe the book in much… Continue

DEVIL MAY CARE by Sebastian Faulks

In 1967, James Bond is called back from a medically mandated holiday to investigate Dr. Julius Gorner, a known drug manufacturer of concern to the British government. Along the way, Bond meets beautiful banker Scarlett Papava, who asks his help to rescue her sister Poppy, last seen in Gorner's company.

Tabbed to celebrate the centennial of Ian Fleming's birth, Devil May Care received more than a year of hype starting with the search for its author. Perhaps lost in the hype was… Continue

RESOLUTION by Robert B. Parker

Graham Powell found himself at a Robert B. Parker signing and did me the great kindness of sending me a signed copy of Resolution, the sequel to his Western Appaloosa.

Former soldier and lawman Everett Hitch stops in a town called Resolution, where hotel and saloon owner Amos Wolfson hires him as a lookout. While Hitch's unflinching dealing with criminals and "softhearted" treatment of the citizenry leave him well liked by the people, he's a bit too free-thinking for… Continue