Yesterday, after months of preparation, I played host for Pennwriters’ Firearms 101 for Writers Workshop. The workshop was a joint effort between Pennwriters’ Area 3, of which I am the representative, and Area 1, which is represented by Catherine McLean. Catherine took care of all the sweet treats and hot beverages, budgeting and registration. I took care of the presenters, lunch orders, and bottled water. And I delegated the presenters portion of the assignment to my hubby.

For the last few months, I’ve been watching him prepare for his own presentation at the workshop. He built an atlatl and ordered darts (spears) for it. He borrowed swords from his sister and brother-in-law. He read and made notes of historical interest. I’ve never seen him study so hard. (The workshop’s first presenter was 79 year-old Max Kremin, who I suspect may become the basis for several characters in several novels in the not-so-distant future. I also suspect he’s already been used in that status previously, as he made quite an impression back when we did a similar workshop for my local Sisters in Crime a couple summers ago. Max has seen and done more in his lifetime than most of us even dream of. He’s passionate and maybe a bit too political, but if you listen, the nuggets of information that you can glean from his talks are pure gold. Plus, his collection of modern, police, and military firearms is amazing and just getting to see and touch some of those things is worth dealing with his forays onto his soapbox.
I missed my hubby’s portion of the workshop entirely since I had to run out to Panera to pick up our lunch order. I heard it went well from others. He said it sounded better in his head during rehearsal than in actual presentation. Yeah, that’s generally how it goes. Our dear friend, Roy Scott, rounded out the lectures with a detailed and focused talk on antique firearms. He also helped clarify the difference between shotguns and rifles.
Afterwards, we headed out to the firing range where anyone who wanted could try their hands at shooting a rifle. I dragged out the atlatl and spears and didn’t make too big of a fool of myself demonstrating them. Anyone who wanted also had a shot at the primitive spear-throwing device. 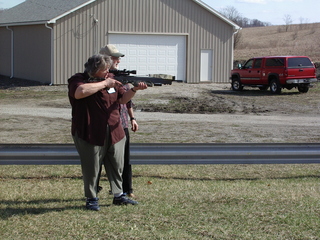 The final event of the day, for those who hadn’t taken off early, was a chance to shoot hubby’s crossbow. Catherine said she traveled two hours from the Erie area. She wasn’t leaving without getting her hands on that crossbow. She did quite well, too.
I’m glad it’s over. Everyone seems to have enjoyed it. Only one person got lost getting there. So all-in-all, I’d have to say it was a successful venture. 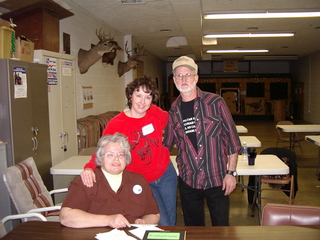