I'm an addict. I admit it. Before the entire world, I admit it. I mean, it's sort of ironic, you know? I managed to live for years without being struck by anything so incredibly and stubbornly incurable, but then I took a fall ... and when I did, I fell hard.

To what am I addicted? 3D graphics.

It started innocuously enough. I decided to do my own book cover. Now, this can be a dangerous decision, but I really wanted to do it. I can say I even felt compelled to do it. And so I went about finding a way. I searched for weeks, months really, for software that would allow me to do the kind of work I wanted to do, to create ... what? Well, I had a vision, initially of a woman running down a shadowy, snow-covered street, casting a terrified glance behind her. But ... as gripping as the image was, I couldn't figure out what program would allow me to conjure it up, and to do so with an appropriate amount of professionalism. 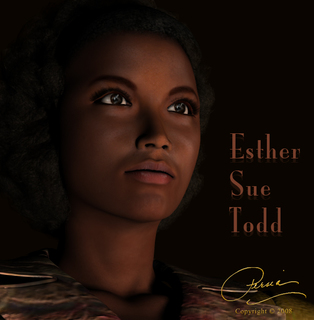 One day, I stumbled upon Poser. I bought the program and experienced mild levels of frustration as I struggled to learn it. For a while, I put it aside, but then came the time when I had to do the cover -- and I did. The cover for Darkness and the Devil Behind Me isn't quite the image I first dreamed of, but I think it's quite fitting. It's an image of Lanie, the newspaper reporter, whose determined inquiry solves a tough crime. Above is an image of Esther Sue Todd, the woman whose disappearance in December 1923 is at the heart of the case. Below is an image of Esther's sister, Ruth, whose plea led Lanie to take another look at the disappearance and the million-dollar heist that followed it. 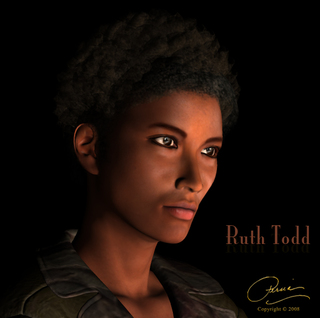 I not only discovered Poser, but the 3D community at Daz. There I found that I was rapidly falling in love with 3D graphics and all it might possibly enable me to do -- to create actual visualizations of my characters, for example, and of scenes from the book. The only limitation was my own abilities. Since then, I've created character studies, some good, some bad. I've uploaded some to my website, and moved others to my trash.

The reason I mention it is because I wanted to point it out as another possible method of livening your websites, adding content, and even enervating your imagination as you write. When preparing to write a novel, P.J. Parrish, for example, puts together a notebook with clipped photographs of people who resemble the book's characters. The folks who put together the Harry Potter movies spoke of how J.K. Rowling had notebook after notebook full of drawings of her characters, sets and scenes. Well, I could never bring myself to clip photos from magazines -- it didn't quite work for me. And I'm not talented enough to make the drawings myself, if that's what Rowling did. But I've discovered that today's friendly 3D programs allow even the least technically and artistically talented among us (ahem, like yours truly), create credible characters and tinker with them until they represent the images we had in mind when first conceiving our story.

For me, the only downside has been the addiction. Sometimes I spend more time working on 3D than I do on writing. But if the final character studies I end up with add to the vividness of my imagination, then I suppose this addiction can't be all bad.