BEA and Who Is This Man? 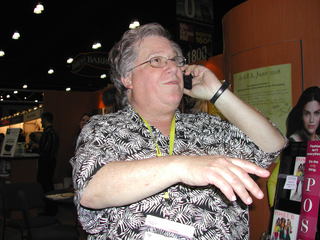 So I went to my first Book Expo this weekend. Had no idea what to expect. Here are some quick impressions:

THINGS I WAS DELIGHTED/AMUSED TO SEE:

1) So many dressed-up people at the L.A. Convention Center. How can some people survive walking around all day in heels? A reminder that this weekend is all about business.

2) A wide array of booksellers and librarians all around the country. I heard that traffic was light this year, but still a number of small-town folks made it out to L.A. Above is yes, the renowned Sheldon McArthur, formerly of the Mystery Bookstore in Westwood, on his cell phone. He wanted people to know that is now in Oregon, operating North of Northwest Books & Antiques, in Lincoln City. His e-mail address is mcarthurca@earthlink.net.

3) Some wonderful small-press publishers, such as Heyday Books and Bleak House. They, like the Mystery Writers of America, was in the West Hall while the large publishers were in the South, but everyone still managed to be doing a healthy amount of business. (Above) Margery Flax of MWA doing her thing. Books, especially MWA's anthology BLUE RELIGION, were flying off the shelves. (Below) Sarah Masters Buckey, the author of the American Girl Kit mystery, A THIEF IN THE THEATER, was signing in the MWA booth. Note to self: we need more mysteries for children! 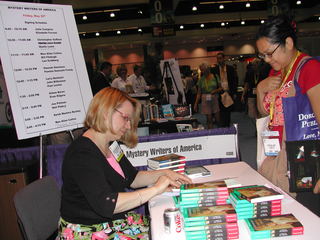 THINGS THAT WERE ILLUMINATING:

1) Presence of so many celebrities: Barbara Walters, Billie Jean King (got her autograph for my husband!), Slash of Guns and Roses, etc. Is this the L.A. factor or the future of publishing? 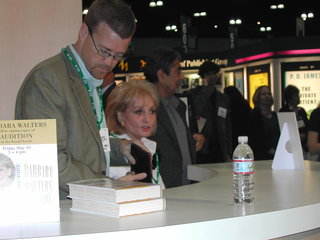 2) Mysteries definitely seemed to be downplayed (good that MWA had a presence!). Big books such as Dennise Lehane's new one (I got an ARC!) were the ones that were definitely being pushed. (Above) A beautiful stack of Michael Connolly's THE BRASS VERDICT. (Above) A employee of HarperCollins gets more of Dennis Lehane's latest ARC from the "magic closet). (Above) Actually Midnight Ink had a nice display in its parent company's booth. (Above) Harlequin's MIRA was also ably pushing its thrillers. (Below) Delightful Michelle Gagnon was signing her latest in Harlequin's roomy signing area. 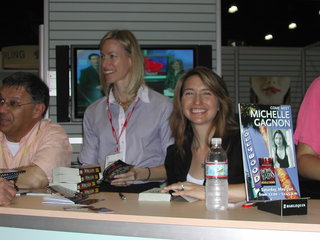 3) Other than the American Girl franchise and a few fantasy series, not many children's books were being hotly promoted. Since I have a middle-grade book out with Delacorte in August, I had my eye on this area. There was a healthy graphic novel and manga representation but I could sense that this area may soon be glutted.

BEA is definitely an industry event. I did run into a few avid readers who were going to town collecting ARCS, but they were obviously hardcore fanatics. For the midlist authors, it would definitely be worth it to attend BEA IF it is nearby (not requiring a hotel stay). I would recommend that you volunteer in the MWA booth because you meet so many mystery booksellers, festival organizers, book groups (I met two women who have a book group in Japan!), and librarians. I'm glad that I attended but it's certainly not anything an author HAS to do. Looking forward to American Library Association convention at the end of this month in Anaheim!

Comment by Bernd Kochanowski on June 3, 2008 at 8:09am
I'm just a reader but still thanks. Very interesting.