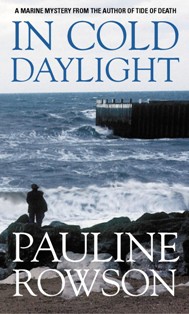 The plot line in my thriller, In Cold Daylight, which was shortlisted for the World Book Day Prize 2008, is turning out to become more of a reality than I envisaged when I first started researching and writing it some years ago, probably because it was based on a true story which I overheard my husband's fire fighting colleagues discussing on the station one day.
In Cold Daylight is centred around several fire fighters from one watch dying of cancer. Many believed their cancer was contracted from exposure to hazardous chemicals in the line of duty but this has never been fully investigated. I took the facts of this case and created a dramatic fictional plot unaware that a major International disaster on a massive scale would be the catalyst to spark studies in the USA into the controversial area of fire fighters cancer.

The increased risk to fire fighters of contracting cancer was highlighted first in a study by the University of Cincinnati, and most recently in research reported in the American Journal of Industrial Medicine, May 2008.

Research from the University of Cincinnati found that rates of testicular cancer were a hundred per cent higher and prostate cancer twenty-eight percent higher among fire-fighters. In addition, the researchers also discovered a fifty percent increase in non-Hodgkin's lymphoma and multiple myeloma. Researchers say fire-fighters are exposed to many compounds designated as carcinogens, or cancer-causing agents including benzene, chloroform, soot, styrene and formaldehyde. These can be inhaled or absorbed through the skin at the scene of a fire.

In the most recent study, the researcher combed through nearly two decades' worth of data from the Massachusetts cancer registry. Between 1986 and 2003, the registry recorded 2,125 cancer diagnoses among professional male fire fighters. They found that, compared with men in other occupations, fire fighters had nearly twice the risk of brain cancer and a thirty six percent higher risk of colon cancer. They also showed higher risks of bladder cancer, kidney cancer and Hodgkin's lymphoma. Facts that have largely gone unrecognised in the UK yet are raising serious questions in America, Canada and Australia.

The evidence is clear that fire fighters suffer from certain cancers at a higher rate than others. Fire fighters spend a career facing toxic dangers in the name of protecting the public. It is an occupational risk and should be recognised. When a fire fighter dies from a cancer identified as occupational, their families need and deserve appropriate compensation. Although In Cold Daylight is fiction there is a strong central message in the novel and readers are asking can this really be happening? I'm trying to open the debate in the UK but sadly no one, not even the press, seems to be interested - yet. They will be though, eventually.