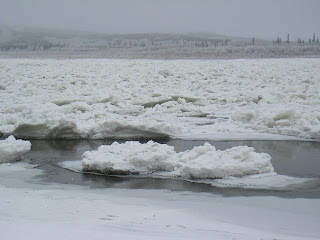 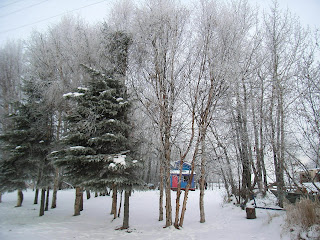 Well, I am just waiting for my flight to Anchorage. It was snowing heavily yesterday and when I rang Penair to find out what time I needed to check in and how bad the snow needed to be before they stopped the planes flying the guy at the airline said "Do you need a ride to the airport?" People are so nice around here. 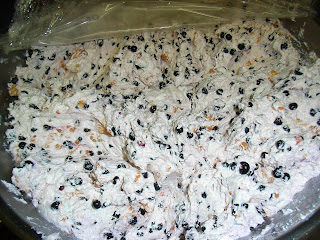 Yesterday I was lamenting the fact that I had not had aqutak (pronounced a-GOO-duck) this trip. This morning as I arrived at the High School one of the teachers came up and said "Donna, there's aqutak in the kitchen for lunch, but you can have some for breakfast. So I did. And it was yummy. Here is the recipe - take a white fish, boil it, squeeze all the water out of it until it's dry flakes, add a pound of lard, a pound of sugar, a bit of condensed milk if you're feeling decadent and fluff the mixture up until it's light and airy. Then add loads and loads of berries. Eat, and listen to your arteries as they harden. It really doesn't taste of fish or lard. The berries burst on your tongue (I think this one is blueberry and salmonberry). It was scrummy. Of course, the downside is that I now have to declare a stomach full of aqutak when I weigh in at the airport. 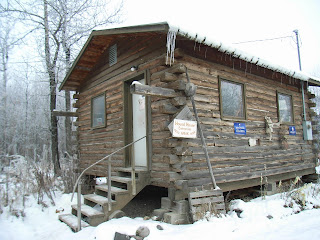 I did, apparently, miss out on a delicious dish - moose nose soup. The recipe appears to be 'cut off a moose's nose and boil it with some water and vegetables. Mmmmmmmm. Delish. This is Pizza Hut Alaska Bush style. Esther makes the most delicious pizzas here. Apparently she can never have a day off.

Yesterday I was speaking to two of the teachers from Stony River which is the furthest upriver school. They were saying that they like coming to Aniak because they see fruit and veg here (remember the price of that celery?!) There is no store in Stony River - they have a flying grocery store come in. One banana costs over $1. I would miss fruit and veg if I lived here. I seem to be existing on meat, meat and more meat. 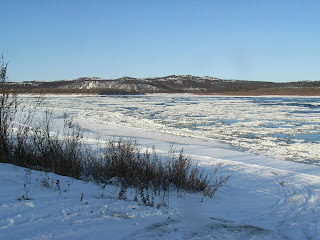 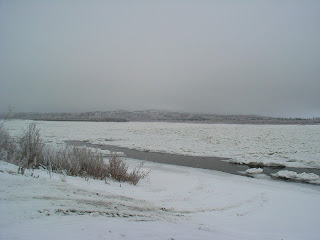 One of the teachers from here in Aniak paid me the highest compliment yesterday. There is one High School girl who sat through 2 exercises not wanting to do anything. I found out later that she has a very troubled home life, and not much to hope for. Then, during the third exercise she really got interested, started smiling, and ended up writing 2 stories for me. The teacher said that everyone at the school was amazed, and the teachers have started viewing her differently becuae of what she did in that class. That made me happy. And now, I think I'm going to try and sneak some more aqutak and then call the nice man at the airport to give me a ride.