We got into the van on our short trip to the airfield, and Judy started handing out travel sickness tablets like a very maternal drug pusher ("the first one is on the house, lady"). I was popping those little suckers like smarties until Judy belatedly read the back of the packet "Oh, wait, it says only 2 in 24 hours...how do you feel?" We'd left the hotel and gone about ten minutes up the road when we came across three moose (mooses? meese?) at the side of the road, just as happy as you please. You know that joke about the horse that goes into the bar and the barman says "Why the long face"? Well, I think that could be written even better about meese. Their faces are HUGE. 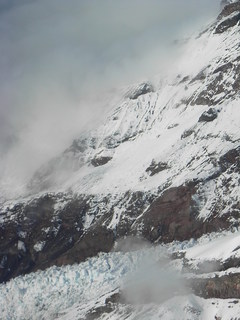 I started to worry about my upcoming radio interview (more about that in the next post) when I was telling Gary that I wanted to see a bear. "You want to see a WHAT?" "A bear." "A WHAT?" (I have never seen a face so aghast by the way). "A BEAR. I want to see a bear." He still looked puzzled "Why can't I understand what she's saying?" Apparently my 'bear' sounds like American for 'bat'. I am now Batwoman.

I'm beginning to get a complex after my episode with the automated lost luggage thing, and now this. I've been practising my American accent but I just sound like an extra from Gone With The Wind who's had their jaw rewired after a freak accident involving a chainsaw and a baseball bat (or is that baseball BEAR...?)


(This picture and the next one are taken from the plane as we went INSIDE the mountain by the way). So, we arrived at the airfield where there were lots of little red and white planes held together with string and blu-tac. Suddenly, we all felt the urge to use the restrooms. We went into the office where they told us that Mt McKinley was shrouded in fog, so we could visit Mt Spur instead. I needn't have told you that by the way, I could just show you my pictures of the top of a mountain and you wouldn't know any difference, but since I have respect for you, my audience (all 3 of you)...well, except for you, Paul, I decided to come clean.
As with the glacier thing (I've been showing all my 500 glacier pictures to people and I can only remember the name of one of the glaciers - Surprise Glacier (as in, it's a surprise I can remember it) and when they say "What's that one called?", rather than admit I don't know I just say "That one? Oh yes, that's Ramones Glacier" or "Ah, yes, the spectacular Johnny Depp. A magnificent specimen of glacierhood." So, anyway, we decided that Mt Spur was just as good as Mt McKinley and we waited for our pilot. The guys did a bit of shopping - buying t-shirts "Do I suit this shade of green, ladies?" "Does this powdeer blue bring out the colour of my eyes?" 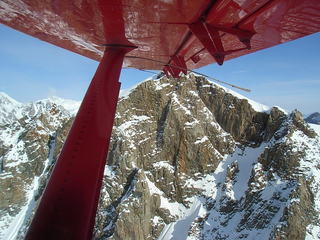 I asked the guy behind the desk if we were going to have to weigh ourselves before we got on the plane (we'd had to give our weight when we booked the flight). I had lost the 10lbs I had taken account of when giving my weight, but, well, funnel cake and American plate sizes cause havoc with a girl's good intentions. I made sure to point out that I was wearing really heavy boots as I was afraid of stepping onto a scale and having a big booming voice shout "You LIED, fatty!" The bloke behind the counter said "We had one guy give us his weight without clothes on, can you imagine." Oh. Everyone chuckled, except me. I ALWAYS give my weight without clothes on. I started to worry that sitting on the plane naked would be a tad chilly but luckily for everyone I was not made to strip off. So we got onto the plane. We all had a seat by the window. The safety demonstration consisted of "There's a
sickbag in the pocket in front of you," and off we set. It was a float plane so we took off from the water which was amazing. We all had headsets on so we could hear the pilot talking to the control tower, and he also had music. Our take off was to The Ride of The Valkyries and there was some very apt music throughout the flight which was fun. The scenery was absolutely stunning - first of all the flat plains and loads of trees.
Then we were up into the foothills of the mountains before finally emerging from the clouds to see the top of the mountain range and Mt Spur. We were taken the scenic route, past glaciers, over an active volcano with steam rising, right down into the mountain which was an unbelievable experience. At one point I almost cried, the experience was so fabulous. 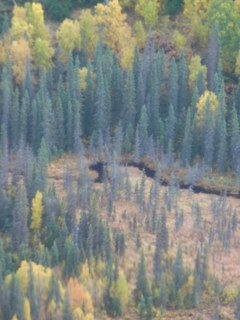 Can you see a bear in this picture? No? Neither could I, but it's there
- probably disguised as a tree and raising its middle finger to the skies.


Coming in to land on Beluga Lake... 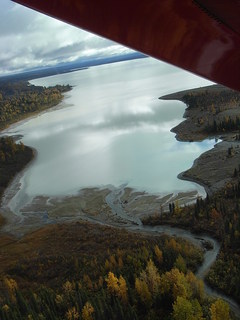 On the return leg we flew over Beluga Lake and the pilot said "Fancy a break?" He landed the plane on the surface of the lake and taxied into the shore. We all got off the plane to complete silence, nothing around us for miles and miles apart from this glorious scenery. Oh, and some bears. I went walking up the beach and discovered some bear tracks. Luckily, even a city girl like me could tell they were pointing away from the best lunch the bear could have expected. Oh...wait...maybe it was walking backwards... 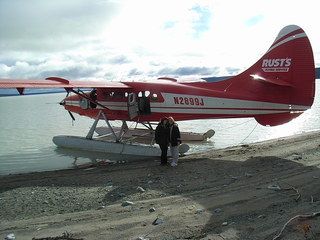 I could have stayed at the lake for ages, but all too soon it was time to get back in the plane and return home.
Gorgeous, truly gorgeous. By the way, I have another 400 or so photos of this day if anyone's interested? :o)

Comment by LC Fraser on October 4, 2007 at 5:41am
I would love to see all the pictures. This time I am actually wishing I was there. For real. It is gorgeous! Only I am not telling my weight, naked or not.

Comment by Angie on September 29, 2007 at 12:33pm
Beautiful! Keep us posted on your Alaskan adventures, Donna. I love hearing about (and seeing pics of) everything.