On Saturday 30 April I was delighted to announce the winner of the Young Crime Writers' Competition 2011for the southern area of England at an awards ceremony at Portsmouth Central Library, and present certificates to the shortlisted entrants from across the south.

George Neame, (16) from Bognor Regis, West Sussex was awarded first prize for his entry The Photograph and will now go forward for the National finals in June. 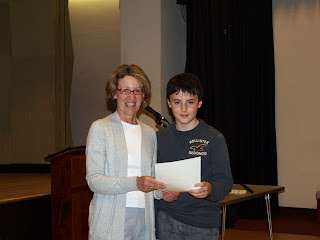 Ewan Murphy (10) from Winchester was Highly Commended for his entry Schoolhouse Murder.

I shortlisted fifteen young writers aged between eleven and seventeen from a total number of entries of one hundred and twenty one that came from across the region including, Southampton, Portsmouth, the Isle of Wight and West Sussex.

The competition was organised by the Crime Writers’ Association (CWA) of which I am a member and writers aged up to 18 were invited to submit 1000 words of crime fiction through their local library.

The winner of the national final will be announced during National Crime Writing Week (13-19 June).

George Neame received a certificate, a £10 book token and a copy of two of my DI Andy Horton crime novels, Dead Man’s Wharf and Blood on the Sand. The national winner will receive an engraved pen, a selection of signed books, and a weekend pass for the winner and one accompanying adult, including one night’s accommodation, and tickets to the Gala Dinner at Crimefest 2012 an International annual convention which draws top crime novelists from around the world.

George Neame is an extremely talented young writer. He was highly commended last year and a deserving winner this year. His descriptions and dialogue were excellent, the story was intriguing, with good pace and very well written. I’ve no doubt that if he continues with his writing we will see his published novels one day.

I was also impressed with Ewan Murphy’s entry. For a young man of ten he shows remarkable talent.

All the shortlisted entries were of high quality. I’m delighted to see so much interest in writing and I’m very grateful to all who entered and to Portsmouth, Southampton, the Isle of Wight and West Sussex libraries for helping to organise this highly successful event.