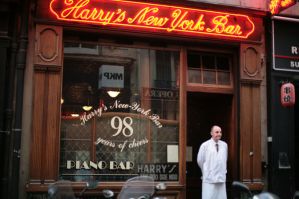 Fortunately, he doesn't drag me out of the vehicle and pummel me. Instead, in a few minutes I find myself on a narrow sidewalk directly outside Harry's New York Bar. I'm bathed in the glow of red neon. Through swinging doors, I'm transported to the past. I feel the presence of some familiar names who have come before me. Gershwin, Hemingway, Bogart.

My guest this week is standing at the bar, rum nearby. He's scribbling in a notebook but  as I close the distance, I see him posting a rather naughty picture up on Facebook. I think we'd better get on with the interview before we both get into (more) trouble.

1. Who are you and what makes you the most fascinating person in your city?

The name’s Jack Soren, novelist. And I’m the most “fascinated” person in my city. If I was the most fascinating person in a city, I’d probably move. And since I’ll be towing a daughter, fiance and her son, and two cats (at last count), let’s hope that doesn’t happen anytime soon.

2. Without revealing a deep dark secret (unless you want to), what one thing would people be surprised to learn about you?

I was an extra in Police Academy III. Seriously. Before studying Journalism in college, I almost enrolled in Dramatic Arts. I actually went to the audition for the program, but when I saw the competition I ran away, bought a reporter’s notebook and got drunk. I’ve been scribbling in notebooks -- and getting drunk -- ever since.

3. What interested you to become a writer rather than something else such as rock star?

Well, as I said, I almost pursued acting. I finally realized I didn’t want to play one part but ALL the parts, so writer made more sense. Of course on reflection after making that decision, it became obvious that I’d been chasing writing since I was a toddler.

4. Writers are readers. With which author(s) would you enjoy sharing dinner? Why?

I do count several career novelists as friends already, but there are certainly more than a few I’d love to break bread with so I could pick their brain, such as Harlan Coben, Lee Child and, of course, Stephen King. Mostly I’d ask them about what it was like for them in the beginning. Being an author new on the scene is so different nowadays compared to even just ten years ago, so I’d love to get their insight on how they would handle breaking in now. 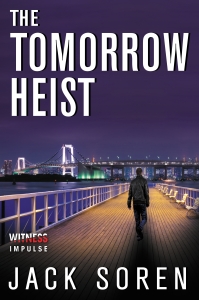 5. If I were stranded on a deserted island or suffering from a four hour layover at the airport, why would your books be great company?

On a deserted island, THE MONARCH, the first book in my Monarch series, would remind you what secrets could be held beneath the surface of an island. And as you progressed on to the second book in the series, THE TOMORROW HEIST, you could look out at the ocean and wonder what was beneath those waves. In an airport, especially a long layover, thrillers are the best medicine. They make time fly. And the Monarch series takes you all the way from New York to Africa to Australia to the UK and over to Japan. But sorry, no frequent flyer miles.

6. Share your process of writing in regards to: plot and character development, story outline, research (do you Google or visit places/people, or make it up on the spot), writing schedule, editing and number of rewrites.

My process tends to vary from book to book. Generally, I use index cards and a cork board to map out story beats (the "big" scenes you look forward to writing in a story). I know my characters and at least have an idea of what the ending will be so I have something to aim for, though I rarely end up where I think I will.

Because the Monarch series is a globe trotting series, I’ve been using google maps streetview a lot and it seems to work out pretty well. I’d much prefer to visit all the places I’m going to write about, but my wallet just won’t cooperate! I also chat with people either in or familiar with the locales. The internet is great for that. But I’m not above just making it up or moving streets and borders to serve my story. I’m entertaining, not educating.

My writing schedule depends a lot on what deadlines I’m working under. I’ll target about 2,000 words a day but as a deadline approaches the hours I work and my quota will change to suit my needs. I’ve done five or six thousand words in a day, but more than that and the rewriting required makes it not really worth it.

If I have enough time, I'll put the work in a drawer for six weeks and work on something else. As King says, it's a lot easier to kill someone else's darlings, and after six weeks you won't be so close to the work and it will be easier to kill your own. Depending on research and "repairs" needed, I like to do a couple drafts, at least. If I have enough time, I'll do a read-out-loud draft. I could probably continue polishing forever, but again depending on deadlines and who the book is for, it might be time at this point to send it off to my editor/agent. It's at this point that I send it to my beta readers, as well. Then I just rinse and repeat when the feedback comes in.

7. “I think I have a good idea for a story, but I don't know where or how to begin. Your process may not work for me. Any advice?”

Sure. Sit down, put your hands on the keyboard and write. Write anything. Just keep typing. You’ll be surprised what you come up with.

That being said, ideas are a dime a dozen. If you read a typical city newspaper from front to back, you’ll have at least a half dozen ideas for novels when you’re done (embryonic ideas that need to be developed, of course). Ideas will end up inundating you after a while. Execution is the trick. And knowing when to discard an idea or combine it with other ideas.

8. I saw an amusing T-shirt the other day which read, “Every great idea I have gets me in trouble.” What is your philosophy of life?

Actually, I recently saw a T-shirt that best describes my philosophy. It said, “Being a writer is easy. It’s like riding a bike, except the bike is on fire, you’re on fire, everything is on fire, and you’re in hell.”

9. Please tell me you're not going to stop writing? What's next for you?

I’m currently working on a standlone novel (or new series...haven’t decided) about a reporter in Miami tentatively titled The Wayward Girl and then I’ll probably write another book in the Monarch series. But if you get all your friends to go buy a million copies of THE TOMORROW HEIST, I’ll gladly switch the order of those.

10. Where can people find more information on you and your projects?

Other than that, I can be found at a few writing conventions every year, usually THRILLERFEST in NYC and BOUCHERCON (in New Orleans next year and Toronto the year after). If life allows, I’ll be at more and the information will be on my website.