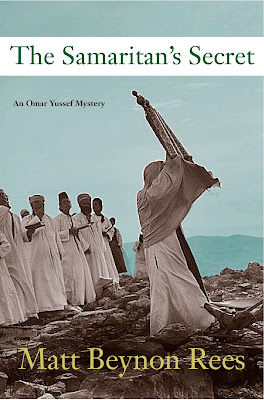 When it comes to homosexuals, Palestinians have it all ass-backwards.

That led me to introduce homosexuality as a theme of THE SAMARITAN’S SECRET, my most recent Palestinian crime novel. I wanted to show how negative attitudes toward homosexuals function in the Muslim world, demonstrating the bloody consequences for gay Muslims and the struggles it causes the people around them. I’m glad I did, particularly after the recent shocking story of a Turkish man living an openly gay lifestyle who was tracked down and murdered by his own father—an honor killing with a difference.

As a novelist who writes about people of a different culture, it’s important not to have the members of that culture think as we’d somehow like them to think, in the West. To have them simply accord with our values.

But I’ve known Palestinian homosexuals and seen their suffering at keeping their real selves secret. Enough to be able to portray those sufferings, as it were, from the inside.

In my novel, the subject also gave me a bit of a conundrum in terms of style.

In each of my novels I’ve translated directly some of the more poetic phrases of local Arabic, as well as slang. So “Good morning” becomes “Morning of joy.” “Get lost” becomes “Fuck your mother’s cunt, you son of a whore.” You get the idea.

The slang word for homosexuals among Palestinians is a little more difficult to translate. Not the word itself, but the negative meaning of it.

Palestinians call homosexuals “Loutis.” “Lout” is the Arabic name for Lot, the brother of the biblical Abraham who was the one good man in the city of Sodom. The man God allowed Abraham to save.

The problem for me was that I couldn’t simply translate the name. To have someone say, “Yes, he’s a Lot-type.” You, dear reader, would wonder what that meant. You might think, “You mean, he’s like Lot, the righteous man. The one man in Sodom who wasn’t sodomizing the other…Sodomites?”

So I had to add a subtle explanation (I hope it’s subtle) that wouldn’t interrupt the conversational flow in the narrative. Here’s the first time the term turns up in THE SAMARITAN’S SECRET, when my detective Omar Yussef is talking with a local sheikh who is of a fundamentalist bent (if you’ll pardon the pun…):

“But I also don’t condemn some of the illogical things people do when their bodies demand it of them,” Omar Yussef said. “For them to do otherwise is to court depression and suicide, and that’s certainly against Islamic law.”

“You can’t mean you see nothing wrong in homosexuality? The holy Koran condemns homosexuals as /Loutis/, the people of Lot from Sodom.”

“Homosexuals suffer enough in our society without me hating them, too.”

“What if you learned that one of your sons was such a pervert?”

Omar Yussef gave a rasping laugh. “I’d blame his mother. But he’d still be my son.”

Of course part of my introduction of gay characters into THE SAMARITAN’S SECRET, which is set in Nablus, was an in-joke that only Palestinians would get. You see, whenever a Palestinian tells a homophobic joke, it’s always about a guy from Nablus who likes to be buggered.

Nabulsi men maintain that their reputation should belong to a group of Iraq soldiers who were stationed in Nablus during the 1948 war with Israel. The Iraqis, according to the men of Nablus, were the true “Loutis.” They raped many young boys from Nablus. So the idea that Nabulsi men tend to homosexuality, they claim, isn’t true.

Recount that “defense” to Palestinians from Jerusalem or Hebron and they’ll laugh that the Nabulsi boys enjoyed the visit of the Iraqi soldiers, which is why the reputation stuck…and on the joking will go.

Life for homosexuals in Nablus or anywhere else in the West Bank is dangerous. Some Palestinians used to sneak into Jerusalem to attend the city’s one gay night club (Israel’s gay culture is centered in Tel Aviv, and most Israeli Jerusalemites are hardly more gay-friendly than the Palestinians, as the man stabbed by a religious gay-baiter during the city’s gay parade four years ago could attest). The Palestinians were the most prominent among the drag queens at the club, which was close to the Jerusalem Municipality.

But the club’s closed now. Palestinian homosexuals simply can’t come out, because their families or neighbors might take a dreadful revenge upon them.

And that’s no joke.

Comment by Matt Rees on December 4, 2009 at 8:41pm
hi Joe, Glad you liked it--and thanks for reading on through the series! There's another one out in February, where Omar goes to Brooklyn. Something a little different, eh? best, M

Comment by Joe Barone on December 4, 2009 at 4:49am
The Samaritan's Secret is an excellent book. It is the first of the Omar Yussef books which I read. It led me to the others.