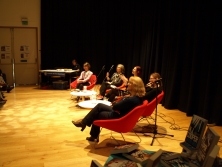 Over a hundred people packed the performance hall at Winchester Discovery Centre in Hampshire on Saturday 8 March for CSI Winchester to listen to me and my fellow crime author Natasha Cooper debate crime fiction and crime fact with crime experts from Hampshire Police, Jane Aston, Supervisor Fingerprint Examiner and Carolyn Lovell, Head of Operations for Hampshire Police Crime Scene Investigations.

The panel was chaired by Angela Hicken from Hampshire County Council Library Service. She put questions to the panelists and it was then opened up to the floor. There was a book signing to follow and the chance for the audience to talk to the authors and experts, and to have their fingerprint taken and pressed into a keep sake keyring. The books were sold by independent bookshop P & G Wells of Winchester. 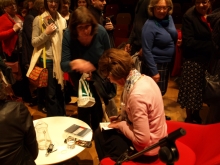 CSI Winchester was a morning event. It is modelled on the highly successful one day event, CSI Portsmouth, which takes place each year in November.

The event was highly enjoyable and informative. The feedback from the audience was extremely positive. It was a great event. My thanks to Hampshire Police, Winchester Library and the audience for making it so successful. 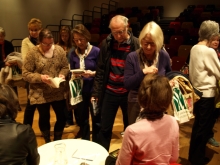 NJ (Natasha) Cooper's most recent title Vengeance in Mind was shortlisted for the 2012 CWA Gold Dagger.

Carolyn Lovell has worked for Hampshire Constabulary for over 17 years, starting as a Crime Scene Investigator. She is Head of Operations in charge of CSI and provides wider forensic consultancy advice and training. Jane Aston is a Supervisor with the Hampshire Police Fingerprint Bureau.

CSI Portsmouth takes place on Saturday 8 November and is a one day event. Tickets go on sale in September.