"Dear Pastor Rehwinkel: I am very sorry to add this additional burden to your work." 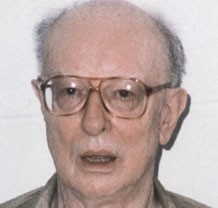 That's how John List started his confession in a letter to his pastor in 1971. List went through numerous reasons - or excuses - as to why he had murdered his own mother, wife and three children.
John List was an accountant and a devout Lutheran who had severe financial problems such as a mortgage he couldn't pay and he was also quite concerned about his wife Helen who was ill from dementia and unwilling to go to church. He feared that such a decision on her behalf would harm the children. Also, his daughter Pat wanted to get into acting and List considered this a sinful occupation.

He summed up in his letter that if he had only been troubled by one of these problems he might have pulled through but facing all of them at once, he felt it would be better for his wife and children to leave this world. As to why he murdered his mother, List stated that he did not want to shock her when she found out about the murders.

List finishes off his letter with a simple "P.S. Mother is in the hallway in the attic - 3rd floor. She was too heavy to move". He asks for forgiveness and then he leaves his hometown of Westfield, New Jersey and disappears for the next 18 years.

It wasn't until 1989 when his story was featured on America's Most Wanted that he was apprehended when people recognized an age-progressed clay bust by Frank Bender as a man called Robert Clark.

Bender was very successful in predicting List's appearance. He used old photographs of List's parents and added a pair of glasses to the bust because he and psychologist Richard Walter had speculated that List would want to appear clever and important and would therefore be wearing glasses.

At the time that John List was apprehended, he was living in Richmond, Virginia under the name Robert Clark which was actually the name of a former classmate.
List had remarried and was once again working as an accountant.

In 1990 List was found guilty of five counts of first-degree murder and sentenced to five life sentences. In a later interview when List was asked why he had not merely committed suicide instead of murdering five innocent people, he stated that suicide would bar him from getting into heaven where he was hoping to be reunited with his family.

The movie "The Stepfather" was loosely based in the List case. In 1993 a TV movie was made about this case. It was called "Judgment Day / Deliver them from evil" and starred Robert Blake as John List.

I wonder if it's possible to buy that movie anywhere?
I would love to watch it.

Comment by J. F. Juzwik on March 11, 2009 at 11:00pm
I'm not sure where you'd get it, but it is worth the search. I've seen the Robert Blake one and it is as eerie as they come. He did a really superior job in that role, as did everyone else in that film. Joyce