The second day of my mini book tour of South Wales on 3 October 2013 on the publication in the UK of the tenth in the DI Andy Horton crime series, Death Surge, started with a coffee and a lovely walk along the delightful seafront in Porthcawl (town by the sea) where I picked up some amusing and interesting ideas for characters and possible locations for a crime novel.

A new small marina is being built - mmm wonder if DI Andy Horton ought to sail in there - there is a rugged coastline, sand and surf - ideal locations for a body - an Elvis Presley Festival for thousands of wannabe Elvis Presleys' and I met a man walking a ferret... 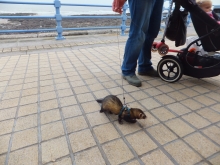 Bobby the Porthcawl Ferret, was an enchanting creature although I avoided getting too close in case he decided to take a snipe at me with his very sharp teeth.

Porthcawl is also host to the Elvis Presley Festival (are you getting a flavour here) where thousands of wannabe Elvis' congregate. I liked Porthcawl, it had some great walks, friendly, chatty people (as they all seem to be in South Wales) and a touch of off-beat humour and eccentricity. It even provided a dramatic thunderstorm and a torrential downpour to add to its air of mystery and there are some great places to put a body in a crime novel.

After the heavens decided to open up and a spot of light lunch in the Bakerboy cafe in the small centre of Porthcawl it was off to the Pyle Life Centre Library, Bridgend to give a talk. I didn't think anyone would show up given the torrential rain but perhaps they're more used to that kind of weather in Wales than we are in the south because I was so very wrong. Almost forty people turned out to hear me talk about my crime novels and crime writing. Bridgend Libraries did a fantastic job advertising the event which appeared in the Welsh newspaper and my thanks to Helen Pridham and the library staff for organising and hosting it.

I met some lovely people who were very keen to learn about my crime novels, my rugged and flawed hero, DI Andy Horton, and the writing process. 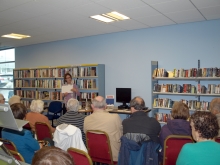 I hope to return to Bridgend in the not too distant future to give more talks and of course to Porthcawl, not only for pleasure but also for research for a possible crime novel and of course another encounter with Bobby, the ferret. Maybe I should invest in an Elvis Presley outfit?