Thought I'd share the latest review of the paperback version of my short story trilogy, 'Murder, Mayhem and Mexico' which appeared today at Amazon, courtesy of Fran Lewis I'm delighted that the book has picked up it's 2nd five star reader review. It's available at http://www.amazon.com/Murder-Mayhem-Mexico-Brian-Porter/dp/19266405... or by clicking on the cover design below the review.

5.0 out of 5 stars Three original stories in three different genre's each with its own special twist, May 14, 2009
By Fran Lewis "Fran and Bertha" - See all my reviews
Murder, Mayhem and Mexico

Murder, Mayhem and Mexico is a brilliantly crafted compilation of three different stories all set in different places in Mexico. The first is "The Devil You Know," which is about a 15 year old murder that is about to be solved. The next is "Compliments of the Boss," which is kidnapping with a twist that the reader will not see coming. The final short story is a heartwarming and intriguing story of how a young child changes the life of a writer in an amazing and positive way.

The Devil You Know:

How far will someone go to keep a secret that could destroy the memory of a person? How far will a sister go to find out the truth about her younger brother's disappearance and possible death? Such is the mystery behind this short, but interesting story about loyalty, deceit and murder.

Although Maria Lopez is a reporter, she is not there for a story. Her brother was one of the missing choirboys and she wants to find out the truth behind his and the other five boys disappearance. Thus begins the story, which began in 1990, and the unfolding of what really did happen.

The Father, as Juan related to her, was almost killed and disappeared along with the boys. The Father had apparently fallen fifty feet from the bell tower and was in the hospital. Juan went to see him and what happened next was both frightening and heartbreaking. When he visited the Priest in the hospital he was incoherent and started to say things that made no sense. Many of the things he said were quotes from the Old Testament that Juan thought had nothing to do with what happened to the missing boys.

The Priest kept repeating one thing over and over again. The Devil is in my Church. Juan did not understand at first what this meant or how his ramblings would lead to the missing choir boys and the truth behind his falling and what really happened to them.

When Morales does reveal the truth to Maria Lopez all will become quite clear. But you will have to read this amazing murder mystery to learn the truth for yourself.

Compliments of the Boss

Angelina was hired to oversee the operations of a travel company. Going out one morning to work she traveled on a deserted road and stopped when she saw someone in trouble. The road was devoid of other cars and people and the man who stopped her quickly abducted her and placed her in the back of his car.

When they arrived at their destination and he had her tied up she demanded to know and understand the motive behind his kidnapping. There were many kidnappings in the area and she knew that none of the victims ever saw the light of day again.

Cunning, clever and deceitful, Angelina must devise her own plan to get away from this multiple rapist and kidnapper. Convincing him to allow her to go to the bathroom was the kidnapper's downfall. Who is Angelina? Why was she able to overtake this man and teach him one final lesson? Who does she really work for and what is the mystery behind the drug trafficking and other illegal businesses that flourish in that area? Who does she really work for and what is her deadly secret? This reviewer will not reveal anymore. You need to read this story for yourself to find out the rest.

A writer from England misses the companionship of his wife who left him. Finding a place to live in a small Mexican village, Harry learns the true meaning of friendship and kindness from a small child and her family.

Sitting alone and brooding about his life, a precious young child comes up to speak with him. Telling him that she is related to the people where he lives, he engages himself in a conversation with Maria Alvarez. This conversation not only leads to a life changing experience for Harry but a possible miracle too.

Asking him to join her and her family to visit a close friend, she explains that this person will be able to make him feel better and understand his suffering and pain. The only thing is, he has to bring along a swimsuit on his journey, as this meeting will take place in the water.

The friend's name is Nuna and he finds her in a pool. She was a magnificent creature and as he spoke with her he began not only feeling better but happier. He spent two hours talking with her and when he left he realized what people meant by "the therapeutic effect of swimming with the dolphins."

He returns to see her many times and learns what she was able to do for Maria and how she cured the child from a fatal illness. Who is Nuna? What life changing results happened to Harry as a result of meeting her? You need to read this heartwarming story that will renew your faith in people and miracles.

Once again Brian L. Porter has written a five star short story book that embraces not the genres of mystery and thriller but a beautifully written short story about real life as well.

This reviewer would love to find out more about Nuna and what else Angelina has in store for anyone that crosses her. Perhaps there will be a sequel to both stories.
Fran Lewis
Reviewer 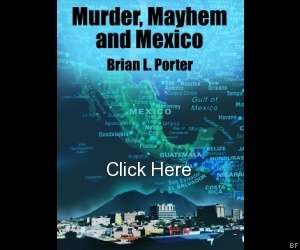 Comment by J. F. Juzwik on May 16, 2009 at 7:44am
Great review! Congratulations, Brian. I'm so looking forward to receiving my copy soon.