But in the few short years after the end of the WWII, when cool was being codified, Hitchcock's blondes were running amok, and French noir was coming of age in one part of the world – drab was not only being exalted, but forced upon a populace in another. And it was only a few doors down.

I got my first up close look at grim communist style when some distant relatives of ours escaped what was then Czechoslovakia and landed on our doorstep. This was about 1983. To describe them as bad dressers simply doesn’t begin to catalogue what I can only define as a look of utter defeat. Hair not quite disheveled, but untended to – combed, but not washed, cut, but not in any particular style. Their clothes were also curious to me. Don’t get me wrong – I’d seen a lot of awful get-ups in my day. I grew up in the 70s and 80s, after all. And I wasn’t making some sort of stuck up sartorial judgment. There’s no other way to explain it other than to say that their clothes – the dreary colors, the awkward sweaters with lumpy shoulders and ill-fitting sleeves, the synthetic materials that not only trapped smells but managed to highlight every possible physical imperfection – they made me sad.

I didn’t know then that this look was not specific to this family, but pervaded every aspect of life in the Eastern Block. It was as ubiquitous as sideburns in 1972, or as the “Friends” haircut in 1995. Only it persisted for forty years, and wasn’t exactly a fashion choice.

I’d seen movies and countless old, family photographs, so I knew what a sharp contrast it made to the down-but-not-out style of war-torn Europe only a few decades before. Back then the woolen caps, the cotton shirts, even the crumbling architecture managed to maintain a sense of dignity. Or at least a look of good times passed. It was the look of fog vs pollution. Fog can be cleared, but pollution leaves a layer of grime, a stench, a persistent cough. It just can’t be fixed with a little bit of mending. It needs a complete makeover.

The cheerless fashions of Eastern Europe may have visited me in Chicago in the early nineteen-eighties, but I didn’t get an actual look at what I came to call the architecture of despair until I went to Czechoslovakia for the first time in 1990 – shortly after the Berlin Wall fell. Growing up in Chicago, I’d seen bleak housing stock, but I somehow wasn’t prepared for the row upon row of apartment houses in outer Prague that stared ahead as mutely as a bad passport photo. The Section 8 housing in urban Chicago had at least earned its ugliness. But these vertical ice cube trays that stood tall in a bed of concrete – not a single tree in sight, or even an attempt at beauty – had arrived fully formed. As if this was the best it would ever be, was ever meant to be. The urine yellows, the tartar build-up browns, the dirty snow grays that gave every façade, hallway, and room a case of terminal ennui – those hues had been chosen on purpose. 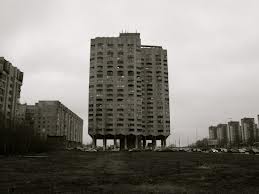 Noir is black and white by style, but the communist style – with the exception of some brilliant poster art – made everything appear not like an old photograph, but a water-damaged one.

Vaclav Havel – the Czech Republic’s famous playwright President – contended that there was an unmistakable connection between bad taste and bad government.

And I think he was right.

Style can be dangerous. It’s sublime. A supreme expression of confidence and individuality – even in the worst of times. At its core, style is the ultimate expression of hope. And in noir, even the most doomed heroine will apply a coat of lipstick and fix her hair. Her clothes will be smart and snappy – freshly pressed. The most world-weary detective will put his collar up, tie his coat at the waist. Because there’s always hope that the fog will clear by morning and that whatever they’re doing is worth a hill of beans in this world.

Jed, you're probably right.  The post came out of a conversation I had with my agent.  My stories take place roughly in the 1935 to 1960 time frame and chronicle hot and cold war intrigues.  I find that when I'm writing about pre-communist Europe, my style is about fog, and when I'm writing about the Eastern Block post, say, 1953 or 54, it becomes about pollution.  Thanks for reading and commenting.

I found this very interesting.  Except for the first paragraph, it seems to be more an anti-communist piece than one concerning noir.

Reminds me a little of Mickey Spillane--he was a master at this.