Footsteps on the Shore has now been published in paperback and as an e book, on Kindle and Nook

Footsteps on the Shore, the sixth in the DI Andy Horton series of marine mystery crime novels set on the South Coast of England has been published as an e book by Severn House Digital and is now available on Kindle both in the UK and in the USA and on Nook at Barnes & Noble 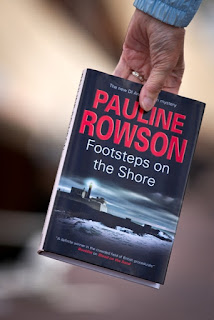 Footsteps on the Shore has received critical acclaim in America along with my other crime novels featuring the flawed and likeable series hero DI Andy Horton. The hardcover version was published in January in the UK and in May in the USA, and the paperback was published in August. The e book was released on 1 September.

This is number six in the DI Andy Horton series of police procedural crime novels and like the others is set against the backdrop of the sea in the Solent area on the South Coast of England, in Portsmouth and the Isle of Wight.

The next and seventh crime novel in the DI Andy Horton series, A Killing Coast will be published in early 2012 and I'm currently writing number eight.

Booklist review for Footsteps on the Shore:

"It deserves mention in the same breath as works in the upper echelon of American procedurals (those by Ed McBain or Joseph Wambaugh for example) and their British counterparts, including the work of Peter Robinson and John Harvey. Procedural fans who haven’t already read Rowson should be encouraged to do so in the strongest possible terms."