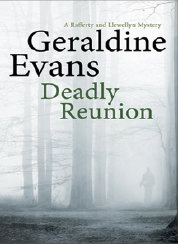 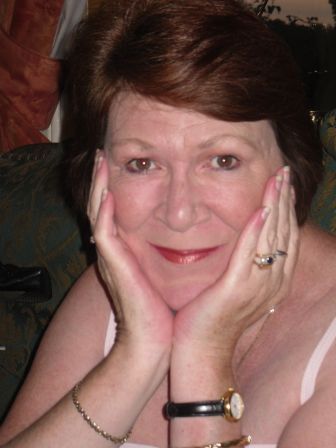 Today I welcome Guest Blogger Geraldine Evans from "across the Pond". Her new book is DEADLY REUNION, and the trailer can be seen at: https://www.youtube.com/watch?v=awvRkiuwoFs

EXCERPT 4 from Chapter One
The Senior Common Room was at the front of the house and their borrowed office was at the back. From where he stood, Rafferty could see cricket and rugby pitches stretching to the middle distance. At the edge of his vision was what looked like tennis courts and Jeremy Paxton had mentioned they had a swimming pool in one of the out-buildings. All in all, they seemed to do very well for themselves.
They had interviewed all the reunees and they had all said much the same. Even the ever-rebellious pig-hater, Sebastian Kennedy hadn’t strayed from the general line, which was that nothing out of the ordinary had happened on the day that Adam Ainsley had gone for a run and never come back.
When questioned as to why nobody had commented on his absence at dinner, they had all claimed they had assumed the dead man had either gone to his room or decided to eat in the town. According to Giles Harmsworth – and the others had said the same – Adam Ainsley had been in a funny mood all morning and – considering this was a reunion – had been pretty unsociable towards most of the group. And when Rafferty had commented on this, Harmsworth and the rest had claimed the dead man had never been any different.
‘Always got in a humour on the slightest pretext’, had been Harmsworth’s take on this. ‘We thought nothing of it.’
‘So none of you went to see where he was when he didn’t show up for dinner that evening?’ Rafferty persisted.
‘No. We had no reason to.’
The school’s dormitories, for the older pupils at least, were made up of two-bed rooms. The dead man had been sharing with Sebastian Kennedy, but as Kennedy had been steadily depleting the school’s wine cellars during the evening, he had – or so he claimed – failed to notice that Ainsley was still not in their room at midnight, which was the time Kennedy had finally staggered off to bed.
‘What do you think, Dafyd?’ Rafferty asked once they were finally alone. ‘Do you reckon they’re colluding for some reason?’
Llewellyn shook his thinly handsome face. ‘No. They’re too disparate a group. I can’t see that Giles Harmsworth or Victoria Watson would agree to.conceal a crime.’
‘Unless they did it,’ Rafferty chipped in.
‘There’s always that possibility, of course. But we have no evidence as yet that this was anything other than a suicide.’
‘Come on! How likely is it that anyone of sound mind would choose such a method?’
‘We don’t know that he was of sound mind – we found anti-depressants in
his room. And maybe he didn’t know what symptoms the poison would cause and thought he would just go to sleep. As I said, we’ve no evidence that he didn’t kill himself.’
‘We’ve no evidence that he did, either. And given that he must have been a well-educated man seeing as he attended Griffin School, would he really not have taken the trouble to find out what the poison did to the body before he did the business? And, taking that into consideration, if he did kill himself, Hemlock seems a particularly peculiar method to choose, given that it paralyzes the limbs and Ainsley used to be a professional sportsman.
Why not just use pills and whiskey?’
Llewellyn gave a tiny shrug. Rafferty was pleased to see that, for
once, his educated sergeant had no arguments against his theories. They had been through the dead man’s things and there had been nothing – apart from the anti-depressants – to indicate that suicide was a possibility, though he got Llewellyn to make a note to check with the dead man’s doctor. No one had said that he seemed other than they remembered him from the days when they had been cooped up together for weeks at a time and got to know one another intimately. No suicide note or suspicious substances had been found. Though, on the other hand, as Rafferty regretfully acknowledged, neither had there been anything to indicate that Ainsley felt he had reason to fear for his life from one of his fellow reunees, Why would he have attended the reunion if that was the case? They had found nothing of any interest at all. Yet it must be one or the other as accidental death was surely out of the question.
Adam Ainsley had, after a career as a professional rugby player, studied to become a sports coach and was now employed as a Physical Education teacher at another private school; this much he had learned from the other reunees. He had been twice divorced and at the time of his death had been single, with no known romantic entanglements. From the various comments from his former classmates, the dead man had been a popular boy with the girls at the school and had cut a swathe through most of them. His moody, Byronesque manner, clearly finding favour with the fair sex. And given his sporting prowess, he had been equally popular with the boys.
To listen to the surviving reunees, the wonder was that anyone should have wanted to do away with such a popular young man. But someone had. Rafferty was convinced of that, in spite of Llewellyn’s mention of suicide.
And he would find out which of them it was, no matter how many expensive legal types they conjured up between them.

LINK TO MY PAGE WITH THE BLOG TOUR DATES:
http://www.geraldineevans.com/wednesday_14_december_2010_035.htm

Blurb: Detective Inspector Joe Rafferty is barely back from his honeymoon before he has two unpleasant surprises. Not only has he another murder investigation - a poisoning, courtesy of a school reunion, he also has four new lodgers, courtesy of his Ma, Kitty Rafferty. Ma is organising her own reunion and since getting on the internet, the number of Rafferty and Kelly family attendees has grown, like Topsy. In his murder investigation, Rafferty has to go back in time to learn of all the likely motives of the victim's fellow reunees. But it is only when he is reconciled to his unwanted lodgers, that Rafferty finds the answers to his most important questions.

PRIZES
The draw of all the comments throughout the Tour will take place at the end of the Tour (end-Feb). There will only be three winners, each of whom wins one signed copy of Deadly Reunion, my latest hardback (fourteenth in my Rafferty & Llewellyn crime series), one copy of each of two ebooks that are the first and second novels in my Rafferty & Llewellyn crime series, that is, one of Dead Before Morning and one of Down Among the Dead Men. They will also receive a subscription to my blog (which they can let lapse when it runs out).

BIO
Crime Author, Geraldine Evans
Geraldine Evans has been writing since her twenties, though only began to
get novels published halfway through her thirties. As well as her popular
Rafferty & Llewellyn crime series, she has a second crime series, Casey &
Catt and has also had published an historical, a romance and articles on a
variety of subjects, including, Historical Biography, Writing, Astrology,
Palmistry and other New Age subjects. She has also written a dramatization
of Dead Before Morning, the first book in her Rafferty series.
She is a Londoner, but now lives in Norfolk England where she moved, with
her husband George, in 2000.
Deadly Reunion is her eighteenth novel and fourteenth in the humorous
Rafferty & Llewellyn crime series. She is currently working on the next in
the series.