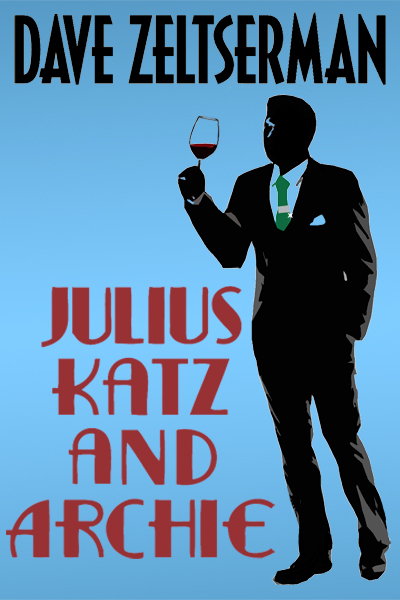 The award-winning Julius Katz mysteries have delighted thousands of mystery fans since first appearing on the pages of Ellery Queen Mystery Magazine in 2009, winning a Shamus, Derringer and Ellery Queen’s Readers Choice Award . 'Julius Katz' introduced readers to Boston's most brilliant, eccentric and possibly laziest detective, Julius Katz, as well as his sidekick, Archie, a tiny marvel of whiz-bang computer technology with the heart and soul of a hard-boiled PI.

Now in Julius Katz and Archie’s first full-length mystery, the stakes have never been higher when a famous Boston mystery writer, Kenneth Kingston, tells Julius he wants to find out who’s planning to kill him. The problem is almost everyone in Kingston’s life has good reason to want to kill him, and this case soon plunges Julius and Archie deep into the world of murder and publishing.

Julius Katz and Archie is available as a Kindle or Nook download for $2.99.

“I thought your dignity and reputation weren’t for sale?” I asked.

A wry smile pulled up the edges of Julius’s lips. “I don’t believe I ever said anything about my reputation being priceless,” he said.

“Okay, your dignity then.”

More of his wry smile. “Technically, Archie, I don’t believe I as much sold my dignity as bartered it away.”

It was a clever joke, but I wasn’t much up to joking then. More of that excess heat began to burn again in me. “For a lousy bottle of wine! That’s what you did it for!”

“I hardly think you can call a ’78 Montrachet a lousy bottle of wine.” Julius’s smile faded as he sat straighter in his chair and rubbed his thumb along the knuckles of his right hand. With others, Julius kept his emotions and thoughts impenetrable, with me he didn’t bother. Right now he was showing his annoyance, but I didn’t care. “The man is a philistine,” Julius continued. “He was going to mix soda water with a ’78 Montrachet to make a wine spritzer. It would’ve been a crime to let that happen.”

“So you were just saving humanity from an outrage?”

“Okay,” I said. “I understand. For a bottle of wine, you’ve agreed to play a stooge.”

Julius stopped rubbing his knuckles. He took in a slow breath and with a forced attempt at humor, said, “And of course, twenty-five thousand dollars.”

“Of course, we can’t forget the twenty-five thousand dollars. So for that money and the Montrachet, you’ll be looking like a dunce to the world.”

“Again, Archie, things are not always what they appear.”

“Yeah, well, as far as the TV and newspaper reporters are going to be concerned, Kenneth J. Kingston will be trumping you at your own game. Should I be ordering you a dunce cap now for the occasion? I might be able to find a good deal.”

I should’ve taken the hint, but I couldn’t help myself. “Sure, of course,” I said. “I understand. But Boss, should I get a jump on updating your biography to reference that you’re no longer Boston’s most brilliant detective, but have slipped to the second-most? Or should I wait until after Kingston plays you for a chump? Now that I think of it, after that happens I’m not even sure you could legitimately claim that title since probably every other working private investigator in Boston would be able to prove themselves intellectually superior to Kingston, so by the transitive property that would in effect make you Boston’s least brilliant detective. Not as compelling a title for you to hold, but I guess we’ll have to deal with it. If you want I can order stationary now to that effect, or I can wait until—”

I pushed him too far. Julius cut me off, saying, “Goodnight, Archie.” And blast it! My world went black as he turned me off!

Praise for Julius Katz and Archie:

“Julius Katz may be the titular star of Dave Zeltserman's new novel, but it's the voice of his AI assistant, Archie, that carries the day. Archie's more human than most "real" people, and funnier, too. The satire bites, and the mystery satisfies. Julius and Archie became favorites of mine when they first appeared in Zeltserman's award-winning short stories, and they're even better in novel form. Long may they thrive.” Bill Crider, author of the Sheriff Dan Rhodes series

“Julius Katz and Archie is a charming and sophisticated drawing room mystery from the pen of the multifaceted Dave Zeltserman. Although the book harks back to the classic whodunits of the Nero Wolfe era, eccentric detective Julius Katz’s sidekick, Archie, is a character straight out of tomorrow: the brilliantly conceived spawn of our digital world. The clever plotting will satisfy mystery aficionados, while long time Zeltserman fans will be pleased to hear that there is a fist of steel lurking under the elegantly tailored velvet glove.” Roger smith, author of Wake Up Dead and Mixed Blood

"It's a nifty change-of-pace for the usually hard-boiled Dave Zeltserman. Clever, sophisticated and witty, 'Julius Katz & Archie' will thrill fans of Nero Wolfe...and readers who never heard of him! Zeltserman knows how to mix character, action, and plot and create a pitch-perfect, modern mystery. More, Sir! The sooner the better." -- Paul Levine, author of "Flesh & Bones"

"Julius Katz is not only one of the most popular and award-winning creations in modern mystery fiction, the sheer wit and cunning of Dave Zeltserman's writing takes you into a world as amusing and surprising as the Rex Stout novels that Dave honors with this character." Ed Gorman, author of Stranglehold

"I’ll say no more but rest assured this is another zesty page turner choc full of smart twists, colorful characters and laugh out loud moments. Katz is a great creation and he and Archie, the heart of the book, are a smashing team." Paul Brazill