I have to say that when I got this read it in its entirety it really flowed. My exposure to fiction of this type has been minimal. I had thought I had it all covered: digital short stories, novellas ,full length novels, but I had not read anything like “flash fiction” or stories under 2000 words that were complete stories. They are very interesting, breaths of fresh air. I enjoy the quick blast, and when a bunch of them are strung together with a common thread like Liverpool, well then it just heightens the experience. Luca Veste knocked my socks off with this. He must be doing the same to others because within hours of the release of this he was riding the charts on Amazon UK and still is, and gaining traction as they say. If you are looking for a different type of read, a really enjoyable, insightful respite, then grab this and have a blast, from what I understand Luca Veste is writing more. That is great news. 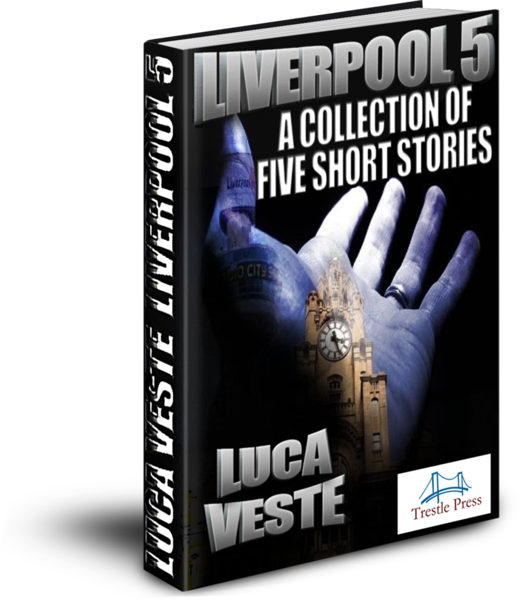 Here is what to expect from this:

“‘Liverpool 5 is five short stories based in and around Liverpool, England. Showing both the light and dark side of life in a famous city, featuring characters inspired by real life situations. From a friendship between an old guy and a young upstart, to a husband and wife in the last gasps of marriage, ‘Liverpool 5’ is about life and death, and the wafer thin relationship between the two.”

Luca Veste is a Husband and Father foremost. A mature student studying Criminology and Psychology, he turned to writing a short time ago, after the success of his book review site ‘Guilty Conscience’.

Born in 1983 in Merseyside, to an Italian father and English mother, he was always either watching his beloved football team play, or found with his head in a book as a child. After a troubled teenage life, he worked for the government for six years. After leaving this job, he returned to education, becoming a mature student.

A former actor, singer and guitarist, he now divides his time between home life, Uni work and writing.

His stories have appeared on the Thrillers, Killers ‘n’ Chillers website. He also has a story coming soon in Paul D. Brazill’s anthology Brit Grit 2.

This collection would not have been possible without the help, encouragement and inspiration of quite a few people. In no particular order I’d like to thank…

And the three women in my life, Emma, Abigail and Megan, my wife and daughters…all I do is for them.”