The afternoon session at CSI Portsmouth 2013 began at 2pm on Saturday 2 November, following a highly successful morning panel session which focused on drugs and drug related crime with crime experts Mick Ellis from Hampshire Police and Dr Alex Allan a forensic toxicologist from Triple A Forensics along with myself as crime author and moderator and crime author Kerry Wilkinson. I stepped down from the stage to act as a moderator and put questions to the panel. Natasha Cooper explained how her work in publishing before leaving to write her first novel made her appreciative of how tough it is to be a publisher especially in one of the most fiercely competitive genres, that of crime fiction. Four of Natasha's many novels feature forensic psychologist Karen Taylor who is based on the Isle of Wight.I suggested that perhaps Karen Taylor and DI Andy Horton ought to get together! Panel answering questions in the afternoon at CSI Portsmouth 2013

Sharon Bolton grew up in a cotton-mill town in Lancashire and had an eclectic early career. Like me, Sharon studied ballet and tap and spent her early career in marketing and PR which we both agreed was a tremendous help when it came to the discipline of writing, editing and meeting deadlines. Even though our crime novels vary in style we both approach our writing in a similar way by starting with a basic plot line and character sketches before beginning the creative writing and letting the characters develop further.

Brian Chappell joined the Institute of Criminal Justice Studies at the University of Portsmouth as a senior lecturer in April 2011 following completion of a highly successful thirty year career with the Metropolitan Police, New Scotland Yard reaching the rank of DCI. Brian was asked about his work as a DCI where he assisted on many major national and international criminal investigations. As a DCI he enjoyed working in a team directing and overseeing operations. Sergeant Tony Birr is the officer in charge of the Hampshire Police Marine Unit whose work includes counter terrorism patrols, the reduction and detection of marine crime, investigation of marine incidents and policing large events. Tony talked about how he had been a detective for many years in Leicestershire before getting his dream job as head of the Marine Unit in Hampshire Police.

The Solent, where my crime novels are set, is a major shipping route for passengers, freight and military vessels making it one of the busiest in Europe if not the world. It is an important recreational area for water sports, particularly yachting. Tony and his team are kept busy investigating crimes such as marine theft in and around the area as well as co-operating with other agencies such as Border Control and he told how he had assisted in the recovery of a major haul of drugs discovered in the bulkhead of a motorboat coming in through the Solent.

Natasha and Sharon debated whether the crime novel should reflect the state of the nation or just simply be an entertaining story, a puzzle to solve. Natasha was for the former while Sharon was for the latter.

The panel also debated and questioned the validity of the falling crime figures whether this was actually so in an economic depression and how serious a risk the cutbacks to the police service were along with the introduction of civilian investigators which raised questions about the possible demise of the traditional professional police detective. 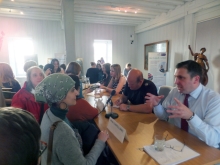 There were again, as with the morning panel, lots of interesting questions from the audience and a book signing to follow where the audience got to talk to the individual panellists.

CSI Portsmouth 2013 closed at 4.30pm. It was a highly enjoyable,entertaining and informative day with lots of food for thought for individuals to take away. I'm already looking forward to CSI Portsmouth 2014.