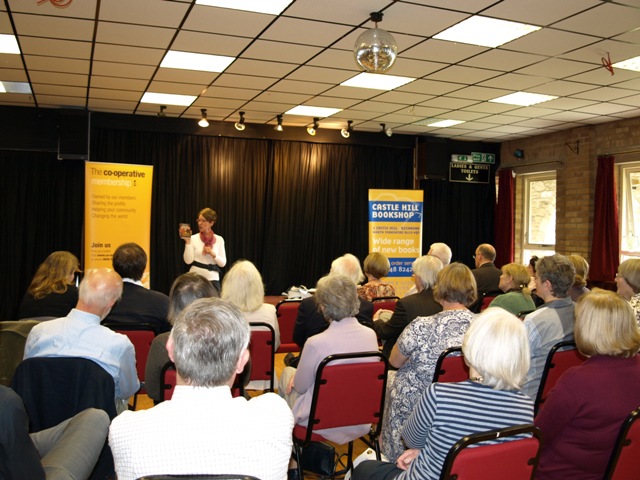 There was certainly a welcome in the hillside and on the banks of the River Tyne for me in the north of England this week during my mini book tour, which kicked off at Newcastle City Library and ended at The Richmond Walking and Book Festival. I met some fantastic people who made me very welcome and very kindly bought tons of my books. Thank you.
The new city library at Newcastle is most impressive and a million miles away from the libraries of old and certainly those of my childhood where nothing above a whisper was permitted. Arranged on several floors with one of those glass lifts through the centre of it, Newcastle Library has air conditioning, computer suites, a thriving café, self service issuing of library books, a massive local collection and a large performance centre and meeting rooms.

The Newcastle of today is also a million miles away from the Newcastle of old with its thriving ship building and coal industry and I felt a little sorry for it and nostalgic for what it had lost. The centre of the City though has some fantastic old buildings and the river is magnificent with its bridges. I’m now going to watch again for the hundredth time that classic thriller, The Clouded Yellow, starring the wonderful Trevor Howard (that voice!) and Jean Simmons, which was filmed in the City in 1950 and released in 1951, and try and pick out the landmarks around the river with its steps and cobbled pavements.

North Tyneside Library was my next stop and a complete contrast to the Newcastle City Library in design. Here the library is in the traditional style located in an older building and situated on the edge of an extremely pleasant square of impressive architecture and a delightful park, the layout and style reminding me of the centre of London but without the traffic and hordes of people. In fact it was very, very quiet. It was also a very damp evening, but nevertheless many people turned out to hear me talk about my books and how I write my marine mystery crime novels. They all made me extremely welcome and were very warm and friendly.

The success of this event was due to the most efficient organisation skills of Ruth Walton at the library. Also a huge thank you for the massive box of chocolates, which made it safely back on the aeroplane to Southampton airport and onward to home on Hayling Island .

Then, after a good night’s rest, it was down to the delightful market town of Richmond in North Yorkshire and the cricket club where I was talking at a literary lunch. It was all very civilised, relaxed and enjoyable and huge thanks to independent bookseller Philip Wicks of Castle Hill Bookshop for inviting me to talk at The Richmond Walking & Book Festival. I was in very good company too with fellow crime writers, Peter Robinson, Ian Rankin, and Ruth Rendell – including me that’s the four R’s or the Fab Four?!!

I had a great time. Talked to lots of readers of my books and introduced my work to many new readers. I hope you all enjoy my marine mysteries and my visit as much as I did.

This afternoon I’m on home turf and off to the Lord Mayors Civic Reception as a guest at the opening of our newly refurbished Arts Centre in Havant for tea and cake. Never a dull moment, eh!