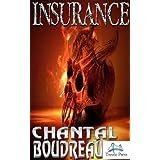 It's also a lot of crime fiction. Crime is rarely a dive into the fight between the clearly good and the clearly evil. That's what makes it so interesting. I like it when the bad guys have good intentions, and the good guys have bad attitudes. The consequences are so much more intriguing than "book 'em, Dan-o."

I suppose that's why I found the short story e-book, Insurance,by Chantal Boudreau so appealing. The protagonist (or is it antagonist?), Norm, runs a one-man mechanic shop. A toxic mix of alcohol abuse, strained family relations and a bad economy are running his life - and business - into the ground.

That changes when a customer suggests Norm "create" some customers. This entails Norm sabotaging vehicles in the area, hoping the owners will stop by for a fix. After all, more money means less stress. That means less drinking, which leads to a better family life.

Is it moral to go this route? That's the question author Boudreau asks readers to answer. It's easy for me to say I would choose the moral high ground. I live a comfortable life with my wife in our house. We don't worry about going hungry or buying what we need. But what if that wasn't the case? What if I was like Norm, desperate for something - anything - good to happen?

Boudreau makes her point clear with the ending she wrote. I won't spoil it, but I was satisfied with her answer.

What about you? Give Insurance a read for yourself, available here on Amazon for 99 centsand all other major e-book retailers. After you're done, share what you'd do in Norm's situation. Is crime ever OK?

Don't forget: Until Jan. 22, 2012, you can get this e-book for free during the Trestle Press BOGO sale. Click here for details.