Morse has Oxford, Rebus Edinburgh, Andy Horton has the Solent

Many of you know that I draw my inspiration and ideas from the area in which I live and where my DI Andy Horton crime novelsand thriller novelsare set: Portsmouth, the Isle of Wight and generally the Solent area on the South Coast of England.

My marine mystery country is a vibrant area full of contrasts and contradictions, which is why I find it fascinating. Portsmouth (UK) is also my home town, or I should say the city where I was raised, so I know it well, warts and all. 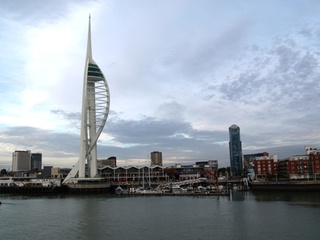 It's a waterfront city with a colourful and diverse history. Home to HMS Victory, HMS Warrior 1860, the Mary Rose Museum, The Royal Naval Museum, and the Portsmouth Historic Dockyard. But it's not all history.

There is a thriving Commercial Ferry Port with sailings to France, the Channel Islands and Spain. And soon the cruise liners Hebridean Princess and its sister brands Voyages of Discovery and Swan Hellenic will be sailing from Portsmouth with the completion of a new passenger terminal in February 2011. That's sure to provide inspiration for a new Andy Horton novel or a thriller. 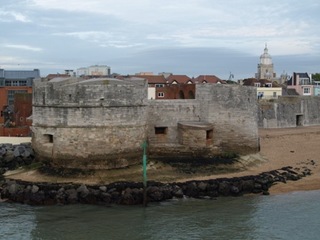 Because the harbour entrance is so narrow you feel as if you can almost touch the ships as they sail past you at the ancient fortifications of Old Portsmouth. No where else can you get so close.

There is always something to see particularly on the sea! The navy ships, the orange and black tug boats, the Continental and Isle of Wight ferries, the hovercraft, pleasure craft, fishing boats, Border Agency boats, lifeboats and much, much more...

The Isle of Wight, just a few miles across the Solent, seems a world away with its rolling downs, beautiful bays, stunning coastline, and prehistoric remains. Yes, it has its poor areas and its rough places but it also, like Portsmouth, has that island mentality that makes it unique. It has some lovely walks, great for thinking through plots while admiring the scenery.

People sometimes ask me if I will run out of ideas for my novels. Perhaps one day I might but a stroll along the coastline wherever that might be: Portsmouth, Hayling Island, the Isle of Wight and I know a new idea will spring to mind and set that to rights.