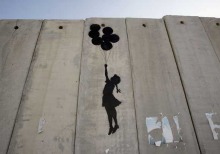 My taxi pulled up at the traffic lights on the way into Jerusalem late Sunday night. A half dozen Breslav hassids were bouncing up and down in front of the traffic, waving signs and grinning with the exultation of wedding party dancers. They were singing, “Death to the Arabs.”
Welcome home, I thought. Something dark descended on me. I’d been away for a week attending a literature festival in Dubai. I’d become close – quickly, as can often happen at a conference which keeps you within the confines of a hotel for many days – with a number of exiled Palestinian writers who initially wanted to chat with me about my Palestinian crime novels. As the car beside my taxi honked its horn in time to the murderous chant, I thought of those writers, those beautiful, intelligent souls, and soon enough I found a way out of the darkness.
I’ve made a bubble for myself in Jerusalem. I’m neither Israeli nor Palestinian. I admit that I don’t really participate in either culture. I’ve enjoyed that detachment, because it leaves me to focus on my writing, free of distractions such as caring what the hell happens around me.
In this case, the bubble burst. I had to decide what I would let in through those fractured defenses. Would it be negativity, anger at the jumping scum at the traffic lights whose idea of a response to the slaying of an Israeli family in a settlement near Nablus two nights before was to call for more blood? No, I knew I could fill the space with the books of the Palestinian writers I had met while I was in Dubai.

For the rest of this post go to my blog The Man of Twists and Turns.